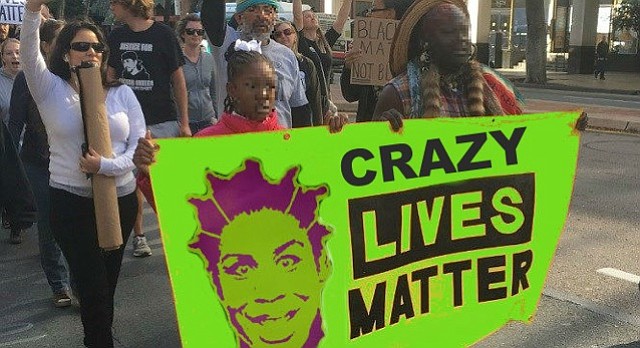 Crazy Eyes on the prize

On the popular Netflix women-in-prison drama Orange is the New Black, Suzanne “Crazy Eyes” Warren is a troubled inmate who requires occasional visits to the psych ward. But in San Diego, she is the new face of a new movement: Crazy Lives Matter. Protestors bearing a lime-green banner featuring Crazy Eyes’ face marched on city hall yesterday afternoon, chanting “Mental Illness is not a crime!” and demanding sweeping policy changes within the San Diego Police Department.

The protest follows hard upon a similar march by the Black Lives Matter movement that took place in response to the recent deaths of two blacks at the hands of police in Louisiana and Minnesota. CLM spokeswoman Marisa Maynard said, “We do not wish to detract in any way from the meaningful work being done by the Black Lives Matter movement to protest the systematic violence against black people by law enforcement officers across America. But we do wish to call attention to the fact that, here in San Diego, seven of the ten officer shootings recently deemed legally justified by DA Bonnie Dumanis involved people with documented mental illness. That’s over 20 percent higher than the national average of five out of ten. I don’t know if San Diego’s police officers are racist. I do know they have an itchy trigger finger when it comes to crazy. And they must be held accountable.”

As of press time, Uzo Aduba, who portrays Crazy Eyes, had not been reached for comment.

That feel when your satire is too damn real and your reality seems like a crazy joke.