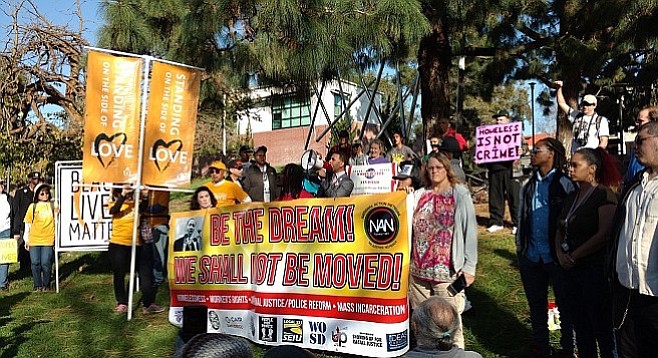 What Martin Luther King Day was all about

"This is the people's parade, where you don't have to pay to march in it."

While a parade drew thousands of spectators to San Diego Bay on Sunday (January 15) the hundreds who rallied at City College before marching on city hall Monday afternoon said their event reflected the true embodiment of Dr. Martin Luther King Jr.'s life work.

"This is what Martin Luther King Day is all about — while some are running around to expensive high-tower breakfasts or expensive parades where our people can't even pay the contingency fee to march, we're here by the people and for the people to march," said Rev. Shane Harris, leader of the local chapter of the National Action Network. "This is the people's parade, where you don't have to pay to march in it."

Chanting slogans including "Hands up, don't shoot!" and "This is what democracy looks like!" the group proceeded about a half-mile down B Street before rallying at the Civic Center, where city offices were closed for the holiday.

"What Martin Luther King Jr. was doing in the final months of his life was union organizing," said Will Johnson, a representative of United Taxi Workers San Diego. "But I'm sorry to say that the income gap has just continued to grow, and we have more workers in poverty than ever before. That's a shame — we're the richest country in the world, yet so many people live in poverty."

Homeless activists from the Voices of Our City Choir also spoke, as did lawyers for Robert Branch, who faces trial next week. Family members of Alfred Olango, who was killed by El Cajon police last September were also present. Last week district attorney Bonnie Dumanis found the shooting of Olango — whose family had called police for crisis intervention assistance — justified.

Following the march and speeches, Harris and supporters posted a list of demands for the mayor and city council on the locked doors of city hall.

Politicians do not want to limit immigration because immigrants are willing to work for less and are unwilling to speak up against employer abuses. Employers want an excess of labor as it keeps labor costs down. Most politicians and employers are anti-union because they don't want workers to have any voice in the workplace. As unions have been beaten down and eliminated so has wages. There is very little that is done without the signing of a contract yet when it comes to the most important thing in peoples lives, jobs, the worker is supposed to rely on the employer to be fair and honest. What our political leaders are doing is investing in poverty, present and future.