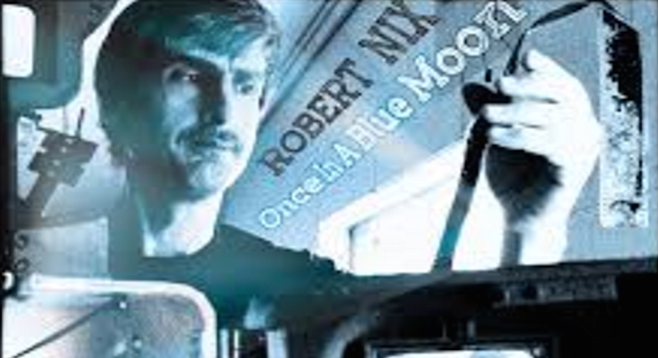 Once in a Blue Moon no soothing tonic

Robert Nix is a Canadian composer and multi-instrumentalist whose recent album, Once in a Blue Moon, highlights a man adding muscle-tone to the business of art-rock.

"Won't Go with the Flow"

...off of Robert Nix's Once in a Blue Moon

Acquainted with absurdity and valuing the artist impulse to dive into life's contradictions rather than concoct soothing tonics to avoid stress and distraction, this is a record that musically is more theatrical in sound and result than the many rock operas that have visited our turntables. It’s useful to think of Nix’s music as being what Pink Floyd might have become if they’d stopped moping and varied their sound.

Nix’s musical ideas are dissonant, at the edge of atonality, but this is not mere grating or reductive rasping, as the music follows the mood, movement, and nuance of his multi-tracked vocals. The music climbs and subsides gracefully; tones and textures are layered skillfully, with a dedication to the off-cast, winsome narratives the songs get across. Not exactly catchy in the sense that one is rewarded with something to hum on the way to work, but one does marvel at Nix's skill at arranging this project so that its length doesn't come off as crammed with too much, too soon, too often. Nix maintains a fascinating equilibrium and bounce to the distractions of a narrator who will follow his own consul. "Won't Go with the Flow" crystallizes this spiky unfolding and folding again, it is a fascinating view of a protagonist weighing the evidence of his experience, sussing out the lesson, if any, to be had.

This is a fine disc for those who prefer their rock and roll dense, busy, and smartly skeptic of the herd-think that passes for wisdom.