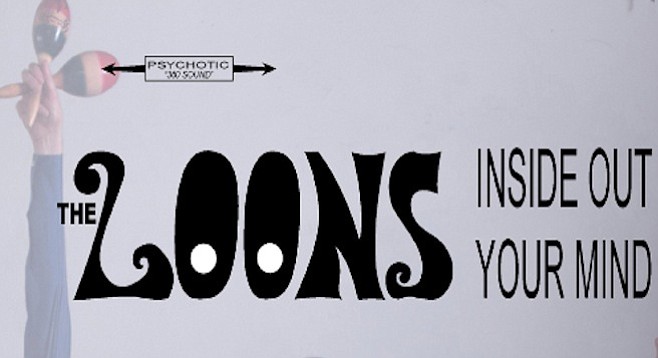 Kicking off the head-trip that is the Loons’ Inside Outside Your Mind, “Siren City” engages with its hypnotic riff and upbeat melody, cruising comfortably detached from the surrounding pandemonium. Snapping at its heels is “Moon and Tide,” which surfs a wave of swishing harmonies and Spanish guitars that propel one into orbit. Then the title track, with its staccato riff, mantra-chanting, and foot-stomping chorus, provides a psychedelic anthem.

A musical departure, with its acoustic folk guitar sounds, “Silence” finds singer Mike Stax delivering a mournful, haunting ballad that, along with “Moon and Tide,” would sit comfortably on Love’s Forever Changes.

The music is subtle when it needs to be — violin and cello make an appearance on “Head in the Clouds” — and then on tracks such as “Cruel Grey Fog,” “I Don’t Live There Anymore,” and “My Desolation,” it’s hyper-drive psych-rock time. The Loons swing comfortably like this, as the songs have the weight to work regardless of style.

A key ingredient to the Loons recipe is teamwork. Guitarists Chris Marsteller and Marc Schroeder complement rather than compete. The harmonies of Mike and Anja Stax gel into a luscious tone. Produced at drummer Mike Kamoo’s Earthling Studios, Kamoo once again shows he knows his way around a soundboard as well as a drum kit. It’s a premium production job.

“As the Raven Flies” is flight of fantasy to the White Album, with a brief stop at “Strawberry Fields”; it may be the Loons most adventurous track to date and a standout here. This is progression, as when Stax sings on “I Don’t Live There Anymore,” “The past is an empty room.” Yes, but with their retro tendencies, one suspects that the paintings from those walls are stashed in the Loons’ garage.