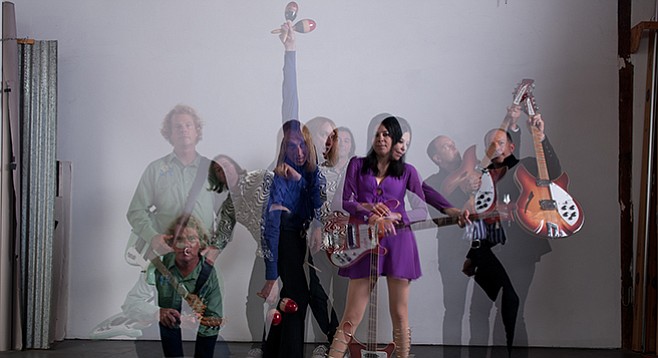 Look out for the Loons, London

When it came time for the Loons to decide the title track of their new album, they relied on some pre-K market research, according to lead singer Mike Stax.

“Chris Marsteller, who plays guitar along with Marc Schroeder, has two young daughters — like, 5 and 3 [years old] — and they always want to hear what they call ‘the rock ’n’ roll song,’” Stax tells the Reader. “And the ‘rock ’n’ roll’ is a song called ‘Inside Out Your Mind,’ and they sing along with it to the point where Chris is kind of sick of it.”

More on The Loons

He better not get sick of it. Inside Out Your Mind is being released by Bomp Records March 27. It’s the band’s fourth release since 1998 but is more studio-influenced than the Loons’ previous recordings.

“Compared to some of the other albums, it’s not that road-tested,” Stax said. “Because we practice at Earthling Studios [where the album was recorded], we’re able to record whenever we feel like it. If we write a new song, we might record it a week later.”

Inside Out Your Mind was produced by band drummer Mike Kamoo and contains 11 songs ranging in age from a month young to two to three years.

Some have been played live but others haven’t worked their way into a set yet — and may not ever.

“There’s one song, ‘As the Raven Flies,’ and it has mellotron, piano, and all those different instruments, so we have to find a way to do it live — we built it up layer by layer,” Stax said.

The Loons, like Stax’s earlier bands (the Crawdaddys and the Tell-Tale Hearts), are heavily influenced by mid-1960s psychedelic punk. But he’s quick to point out that his band is not a retro band.

“We like the aesthetic of how things were recorded in the ’60s, how the records sounded, the tones of the instruments, but as far as creating the music, that’s new. That’s all now. It’s not a historical reenactment,” Stax said. “What you always bring to the music is your life experience and musical experience.”

The Loons’ decision to sow the same rocking soil as mid-’60s bands such as the Who, the Kinks, or Pretty Things is because they feel those bands’ musical blueprints can still be plumbed to new depths.

“The bands from the 1960s evolved based on the technology,” Stax said. “We ignored the technological advances...the evolutions are personal.”

Stax’s wife, Anja, the Loons’ bass player, said there’s a reason why the ’60s looms large in the Loons’ legend — and with the culture at large.

“Everything in the 1960s — cars, fashion, hairstyle, furniture, architecture, everything — was so amazing because everyone was just opening their minds and thinking about different things, and I think everything now is just going backwards,” she said.

Mike Stax is from England, Anja is from Germany, but they have settled in La Mesa and recorded Inside Out Your Mind in El Cajon.

The Stax are quick to say that regardless of their country of origin, the Loons are definitely reflective of their current home.

“Our music definitely reflects the environment,” Mike said. “We have a song on the new album called ‘Moon and Tide’ that, for me, is very evocative of the vibe at night down at the beach.

“Even without trying, you reflect where you’re from. We’re essentially a California band with some European flavor.”

The Loons and Glenn Campbell

The Loons will get a chance to reacquire some of that European flavor in April. A week after their March 28 record-release party at the Casbah, the Loons will be in London playing the Beat Bespoke Festival both as the Loons and as the backup band for Glenn Campbell, a psychedelic steel guitarist who has become a cult hero, thanks to his work in the mid-’60s band the Misunderstood.

“We played the first festival back in 2005 and so we’re back for the tenth,” Stax continued. Anja says the band could tour more widely in Europe if they chose.

“I lived in the mod scene,” she said. “I have contacts in every country.”

However, Mike said that the band’s goals are different now that many of the members have children.

“Two to three weeks in Europe is not practical,” he said. “We have a following, but we’re not about to get a big record deal or a big Warped Tour.”

“It’s fun. It’s part of our social life,” said Mike. “I can’t imagine ever stopping doing it, but we’d never move to L.A. to make it big. We’d lose what makes us special.”

The Loons’ record-release for Inside Out Your Mind is Saturday, March 28 at the Casbah, with the Misunderstood, featuring Glenn Campbell, and fellow San Diego psych-rock stalwarts the Schitzophonics.