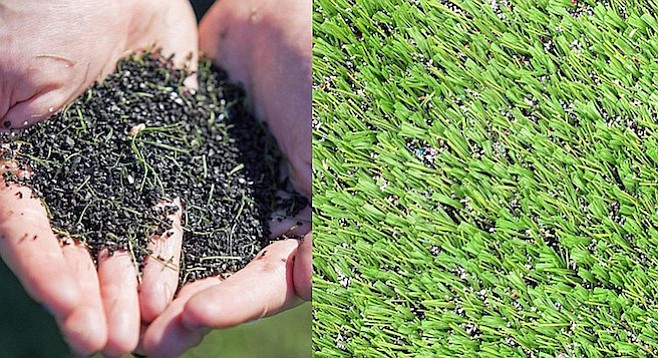 "Our children shouldn’t be the canaries in the coal mine on this one.”

Erika Lundeen first became concerned about artificial turf while substitute teaching at Loma Portal Elementary last year. “When I saw the kids rolling around in this black stuff on the field, I asked the PE teacher what it was and she didn’t know. Shortly after that, my son came home and said his school [Silver Gate Elementary] was getting a new artificial field.”

Lundeen had some concerns, so she asked her son’s school to put the brakes on installing artificial turf — at least until an EPA joint study was released in two to three years. The study involves testing 40 synthetic fields and up to nine "tire crumb" manufacturing plants. Preliminary results are due at the end of the year.

“The principal told me she wouldn’t go against the parent majority," says Lundeen, "so I started a petition. Even with over 200 signatures, the principal decided to go ahead anyway. They keep pointing to a safety study paid for by the tire industry. Remember when there was smoking on airplanes and schools were built with asbestos? Chemicals are innocent until proven guilty and can take decades before deemed unsafe. Our children shouldn’t be the canaries in the coal mine on this one.”

Lundeen recently witnessed what she believes was a serious synthetic turf hazard. One hot day in late September at Euclid Elementary, 44 students were sent to the school nurse for heat exhaustion after playing soccer on a new synthetic field. She said the field reached temperatures of at least 120 degrees. 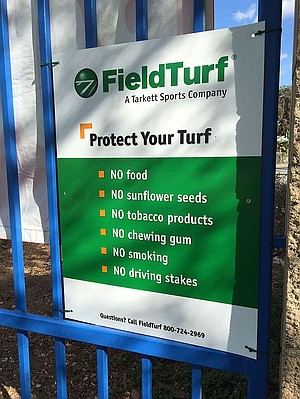 Lundeen said the only signage she’s seen near artificial fields have had to do with protecting the turf’s warranty.

“A few of the kids were also doing snow angels out of the black rubber and throwing it at each other before going to lunch without washing their hands. All of this on opening day for their new artificial field.”

Lundeen is recommending an opt-out form for parents.

“At minimum, they should not install them in elementary schools until we know more. It’s harder to make young children understand the safety precautions than it is for those in high school.”

This is an argument that's gone nowhere with the San Diego Unified School District, as all 11 schools set to get synthetic turf in 2017 are elementary schools.

Lundeen said the only signage she’s seen near artificial fields have had to do with protecting the warranty.

The city also doesn’t seem to be shying away from synthetic turf. A 2016 city document lists several parks, including Robb Field in Ocean Beach, with synthetic turf in their future. Robb Field, where Lundeen's son also plays, is one location that may go against the city’s 2011 synthetic-turf guidelines that say not to install synthetic turf in areas prone to flooding. 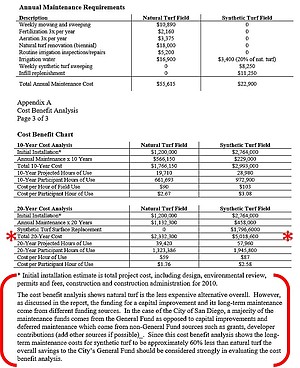 The city also did a cost-benefit analysis in 2011 that unequivocally shows that synthetic turf is much more expensive than natural turf — both in the short- and long-term. The silver lining for the city seems to be the savings in maintenance costs for synthetic turf; this point is key because maintenance costs come out of the city’s general fund. The city’s argument seems to be that if funding for synthetic fields can be found outside of the general fund, then it’s seen as a win — regardless of the actual total outlay.

Regarding the difference in cost, the San Diego Unified School District website states that it costs approximately $500,000 for an acre of natural turf and $1 million per acre of synthetic turf for a joint-use field (the city and schools usually share these areas). Furthermore, within a 2011 school-district meeting agenda, individual synthetic-turf projects were said to range between $750,000 to $2 million per project.

According to documentation, Byrom-Davey has been installing synthetic turf for the district since at least 2006. As far as cost, Steve Davey countered that the numbers are closer to $500,000 for an acre of synthetic turf. Davey also said that the cost can vary depending on the size of the field and associated demolition, grading, drainage, goal posts, and so on.

When it comes to life span, he said, “Synthetic turf fields normally last around eight years and sometimes up to ten or eleven years. You really cannot put a time on natural grass; it needs constant upkeep. If you have the personnel to take care of it, then grass can last longer than synthetic turf.... 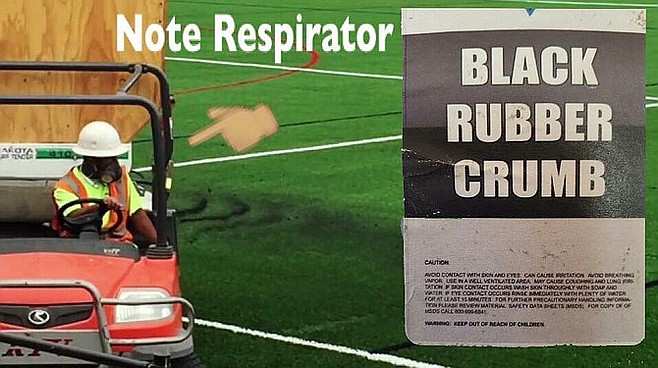 “As far as safety and the crumb-rubber issues, we don’t have enough knowledge of all the testing that was done, but do know based on all the findings the cryogenic rubber is by far the cleanest used and the independent testing shows it is safe. There are alternate organic in-fills being used but they have not been tested as far as we know.”

Questions about the safety of synthetic turf have been around for decades. In 2008, then–attorney general Jerry Brown sued the big guns in artificial turf, including Field Turf (the school district's synthetic-turf supplier) after high levels of lead were found in their products. The suit was settled in 2010 with the requirement that they reduce lead levels.

While Lundeen waits for the EPA to decide if the synthetic turf at her son’s school is safe, it might be worth asking why the answer to keeping tires out of our landfills has been to put them onto playgrounds.

In 1974, the four-year-old U.S. Environmental Protection Agency started exploring tire-reuse options. At the top of the list was using them to create artificial reefs and burning them for fuel. It took until the 1990s to seriously kick around the idea of using recycled tires on playgrounds. It took another decade until the EPA partnered up with rubber manufacturers and environmental groups to promote artificial turf.

The current EPA joint study is in part due to a controversial 2008 statement made by the Consumer Product Safety Commission. A public watchdog group called them out for using data supplied by artificial turf lobbyists to determine the safety of synthetic turf. They used this biased data to reassure the public that synthetic turf was safe to play on.

In one internal document dubbed the “don’t chew on it” email, a safety commission chemist tested a green tarp with lead at 3000 parts per million and said it was similar to lead levels in artificial turf. To give that reading context, the EPA’s standard for lead in bare soil play areas is 400 parts per million.

In May 2015, the chair of the Consumer Product Safety Commission testified to Congress that he no longer stood behind his agency's 2008 statement that crumb rubber was safe to play on, admitting that the statement was political in nature.

Kudos to Lundeen for her work on this. It's only when individuals get concerned and get active that we all find out how much of our governance is based on bad decisions and conscious deceit. Few issues demonstrate that more unfortunately than the use of artificial turf, especially for schools.

Any field athlete will tell you that natural turf is preferable both for performance and prevention of injury. This article doesn't even mention the biological impacts of creating vast dead zones that support no wildlife above or below ground, increase sunlight reflection (adding to global warming), capture no rainwater (and so worsen flooding), and have to be treated with anti-microbials (which turns into toxic run-off when it does rain). Figure in the health risks of the physical product to children if not all humans and just plain lazy accounting detailed in this article, and not even our water shortage is worth supporting this ugly bamboozle.

I do have one question regarding the claim about Robb Field having synthetic turf in its future: the closest reference I could find in the city document at the link is on page 107, "Renovate turfed areas and improve irrigation at Robb Field." I'm familiar enough with municipal double-speak to know that this could be interpreted either way. Julie, could you or someone else confirm this? I suspect that a move to fake grass would be unwelcome news to the many teams that use Robb Field, and they might get better traction as it's a city park not under SDUSD.

As far as the environmental cost of one artificial field needing the planting of 1800 trees to offset its carbon footprint (over 8 years) as well as the g-max (shock absorption testing) that the SDUSD hasn't done in eight years (the NFL does it before every game) and the fact that watering down a synthetic field to decrease heat hazards only lasts 20-30 minutes weren't included in the article (as well as many other things) because it's just not possible to include everything in one article.

Sorry, wasn't meaning to sound critical: there's obviously so much that's wrong with artificial turf that we could keep this thread going for a week. And now I see on the next page that they specify those "'improvements" for field #8 (requested in 2003), not what I mentioned for the rest of Robb Field (deferred maintenance since 1995). Since it says the source of both requests is the Rec Council of the Community Planning Group, maybe they should be sent a copy of your article?

Guess I'm most surprised that I can't recall seeing Sierra Club or other environmental groups take a stand on this topic. But looking at that list, it will hopefully be a long time before we have to worry about stopping the city parks being ruined with fake grass.