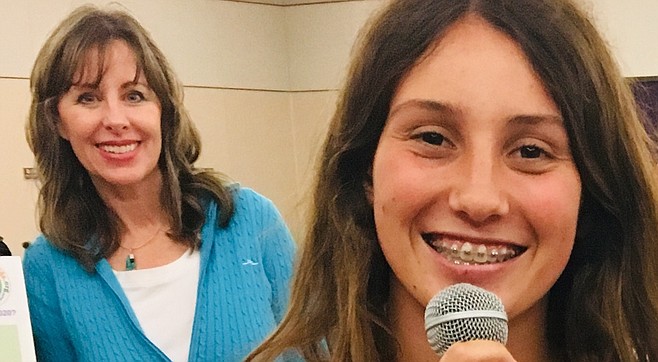 An episode of Nan Sterman’s “A Growing Passion” show on KPBS-TV mentioned the idea that unlike trees and grass, synthetic turf causes a “heat island effect.” She showed how one spread of ersatz lawn measured 148 degrees.

She says that the ground underneath can become contaminated with toxic leachate. It’s a petroleum product. And then, when you tear it out at the end of its life, say 15 years later, there is no place to take it to get recycled.” 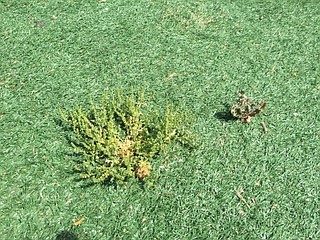 Sterman says that when she spoke to a group in Fallbrook she discovered that weeds were growing up throughout the fake lawn that surrounds the public clubhouse they use. “They install it thinking they will save water but it turns out you have to wash it all the time because of pet waste and dirt. And then, when you wash it, the toxics pollute the soil underneath.”

The fight against synthetic turf is just getting organized. Suzanne Hume says she was sidelined by the 2017 exposure of helicopter-dropped pesticides that was spread on the tomato fields near her Oceanside home. “I had difficulty speaking and breathing. My lungs were burning…I had tubes down my nose and throat.” She didn’t sue. But Hume and her husband John Bottorff moved away from their home near Guajome Park. She gave up her full-time teaching job to launch CleanEarth4Kids.org, a non-profit run by her and her husband.

“When something happens to you like you end up struggling to speak, you decide you must do everything in your power to make sure kids have a safe and healthy future,” says Hume.

They corral area teens to get organized, form clubs, and lobby local politicians to do thing like plant trees and stop installing fake turf. Their efforts at public meetings were thought to be quaint and sweet. But then they got a grant from the California Air Resources Board for $99,560 to start making a difference.

It seems to be working. “Everyone has a right for clean air and water,” says Hannah Smith, 16, a student at Oceanside’s El Camino High and a member of CleanEarth4Kids.org. “We just got a grant to put up three no-idling signs and to plant four trees at every school in Oceanside and Vista. One minute of idling makes more carbon monoxide than three packs of cigarettes.”

Neither Hume or Bottorff get paid for their work with CleanEarth4Kids. Besides the trees and signs they are also using the grant money to help underwrite prizes for essay writing contests and putting potted plants in classrooms.

Hume’s approach is cheery and optimistic as she speaks at schools and Rotary Clubs. But she knows her cause needs to be pushed firmly and professionally at the local government level. “[County Supervisor] Diane Jacobs is now doing a complete review of pesticides used on county land. We are meeting [Supervisor] Nathan Fletcher at the end of January.”

But sometimes it’s not nice. “It’s been really challenging,” admits Hume. “At one [Oceanside] city council meeting on December 4, [councilmember] Chris Rodriguez said the city can make money by paying to install synthetic turf fields at Jefferson Middle School and then charge people to use them. And they want to pay for [the synthetic turf] by using grant money from Prop 68 [passed in 2018]. The parks and recreation director said he applied for this grant. They claim those fields are safe but they can’t claim that because there is lead, heavy metals and a whole class of toxic chemicals in those blades of grass.”

Diane Woelke is a retired certified nurse with a masters degree in midwifery from USC. She is involved in an ongoing battle over artificial grass with her neighbors in Oceanside’s Arrowood neighborhood. “My neighbor carpeted their entire front yard which is on a slope greater than 25 percent so it’s a violation of city code.” She says the slope allows toxic runoff to flow into city drains. “Research shows there are many carcinogens and other toxic chemicals that end up seeping into our water table.”

Woelke says so far she has sought but received no support from her Arrowood homeowners association. “The temperature gets as high as 200 degrees and she allows her grandkids to play on it. I would never allow my grandkids on it.”

She adds she has also railed with the city of Oceanside against the installation of rubber playground matting at nearby Luiseno Park. “It’s falling apart.” Regarding the installation of fake grass at Jefferson Middle School: ”I think it is unconscionable that they would subject the kids in a lower socioeconomic neighborhood to these poisons in their playground.”

Carlsbad’s Mary Anne Viney says she has a mixed scorecard with her efforts to get her city and school district to stop exposing its residents to poison. “They both now have a non-toxic policy.” She says she successfully got the city to start using organic instead of synthetic pesticides.

But Viney says she wasn’t as lucky with artificial turf. “I asked the city to delay it back in January of 2019.” She says California’s EPA (Office of Environmental Health Hazard Assessment) is about to release the results from a four-year-old study on the toxicity of fake grass. “I just wanted them to wait until it came out. And they did delay it for six months or so.”

But then she says Carlsbad started rolling out the artificial turf at Stagecoach Park in July.

“There are hundreds of chemicals,” says Viney. “Some are known, some are unknown. Kids are constantly getting exposed to them on their skin and by breathing. I just can’t imagine why they wouldn’t use natural grass.”

Viney says California was once on the right path. “The state tried to pass a law that prohibits this stuff, but then it was watered down. Now you have [state agency] Cal Recycle giving grants for schools and cities to install this stuff. I think it is atrocious to exploit our children this way. I didn’t tell the city of Carlsbad to not ever use it. I just said wait until we get all the facts. That would be a lot more prudent than using these kids as guinea pigs. I want to know why they still use it when there’s all these studies that say we just don’t yet know if they are safe enough. I guess we’ll just have to wait 10 or 20 years to see if these kids get cancer.”

Viney says she relies on nontoxicneighborhoods.com for her data. “Right now this is all just a grassroots effort.”

Councilmember Rodriguez responds: “I never made reference to a field at Jefferson and then charging the public to use it.” Suzanne Hume says: “He may not have said, 'Jefferson Middle School,’ but the grant application specifically names it as one of two sites to get synthetic turf.”

A review of that night’s meeting shows that the council approved a “park improvements” grant seeking Proposition 68 funds. The grant specifically mentions Jefferson Middle School’s field and track as one of two local areas that would be equipped with artificial turf should the grant be obtained.

In a separate item where the council approved asking the city staff to create a feasibility study of installing synthetic fields, Rodriguez referred to “charging leagues” to use fields that have been modified with synthetic turf. He did not specifically mention Jefferson Middle School at that time.

I thought that artificial turn was the answer to water conservation. I replaced the grass in my back yard with artificial turf. (front yard did not have grass). It look great at least for a while. Unlike the ads artificial turf needs to be maintained or it mats down. It does heat up with the sun so that when it is hot out you can not walk on it without shoes and it is too hot for pets. If you have dual pane windows and the sun reflects off them onto the artificial turf it will melt. After having it for two years I took it out and put in grass.

Prior to reading this informative article, I knew nothing about artificial turf. I thought artificial turf was good for water conservation too. No idea it would melt, heat up or cause all these problems, especially toxic chemicals. We're keeping our grass lawns.

Nan Sterman- Yes I attributed quotes to you that were said by someone else. The article has been corrected. I tried to call you Tuesday to go over them but you did not get back. Nevertheless, it was my mistake and I regret the error.

I was so glad to see this excellent article about the dangers of synthetic turf and why it should be avoided. I was at the city council meeting in Oceanside when Councilman Chris Rodriguez said that having “professional fields” would allow the City to charge leagues to play there. The Parks and Rec Commission is prioritizing lighting for the City’s playing fields, to expand the hours that they can be used, because many sports leagues — soccer, baseball, rugby — are having to go elsewhere. Now that we have a non-toxic spray policy in Oceanside, it doesn’t make sense to remove the healthy grass fields and subject children to three times more abrasion injuries and extreme heat as well as toxic chemicals.