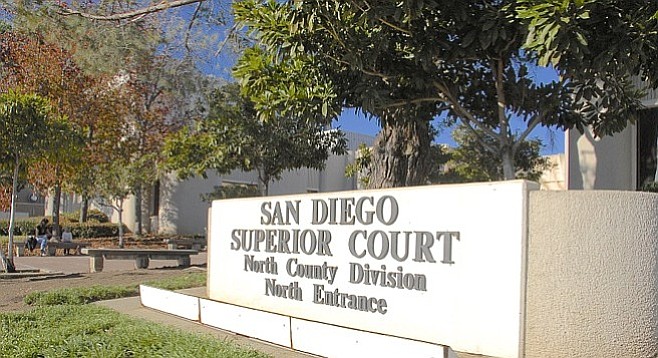 On the day set for her misdemeanor trial, Anastasia Kirkeby, 50, a woman plagued by multiple drug-related arrests at her home in Encinitas, made a plea deal and was ordered to get counseling. That hearing was on November 10.

Kirkeby was the owner of the home at 1507 Rancho Encinitas Drive in Encinitas that went up in flames in July. After authorities extinguished the blaze, the body of 23-year-old Shelby Ann Black was found burned to death in an upstairs bedroom. A man who survived the house fire, Jeremy Lane Henry, 39, reportedly told officers that he escaped from that bedroom. Henry was one of four persons arrested with Kirkeby during a drug raid in December 2014 at the Encinitas home.

After she was arrested in December last year, Kirkeby immediately paid a $1500 fee to Aladdin Bail Bonds to guarantee her $15,000 bond and she was released. Kirkeby then failed to appear for her arraignment and the judge declared her bond forfeited, but when she showed up in court a few days later, on January 2, 2015, she was allowed to remain at liberty on “reinstated” bond.

Kirkeby reportedly has “multiple narcotics related arrests” and neighbors noticed “an uncounted number of transient-type narcotics users” frequenting her home, according to San Diego sheriff’s deputy Nicholas Backouris. The deputy went so far as to state that the residence became a “flop house” and “open sanctuary for criminals in North County San Diego”; Backouris claimed officers became aware of “a steady influx of drug addicts and gang members to the safe haven of the large home.” 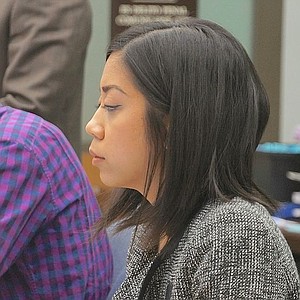 On the day that authorities raided the house, Kirkeby was reportedly found hidden in a “secret” room. The prosecutor, Melissa Ocampo, stated in court papers: “Defendant resisted, obstructed, delayed deputies by concealing herself in a hidden room.” The prosecutor further accused Kirkeby of being uncooperative throughout her contact with authorities, being under the influence of methamphetamine, and then feigning convulsions until she was taken to hospital on the day of her arrest.

Ocampo had charged Kirkeby with two misdemeanors: under the influence of meth, and resisting, delaying, and obstructing a police officer.

Papers found in the court file suggest that Ocampo was having trouble coming up with “material witnesses.”

Two weeks ago, on the date set for her misdemeanor trial, Kirkeby made a plea deal. She admitted that she “delayed a Sheriff in the performing of his duties” and the under-the-influence charge was dismissed. Kirkeby agreed to get “20 sessions of counseling inclusive of substance abuse therapy”; she has until October of 2016 to complete it. The judge decided not to impose ten days of public work service, pending successful completion of probation. Kirkeby could have gotten a year in jail, according to plea-deal paperwork.

Kirkeby, who listed a Vista home address on recent court paperwork, also was ordered to pay $635 in fines.

Anastasia Kirkeby is a career criminal and should be treated as such. She is total scum and should spend the rest of her worthless life in prison.

Do we have this right? She had a home that was for years a druggie house, and when it burned down the fire killed a young woman. But no charges came from that; no, these charges, misdemeanors both, predated the fire. And that's the best the DA could come up with after years of drug activity in her home?

Then there was the apparent inability of the Encinitas sheriff's station and its staff to curb the illegal activity and use of that home. That's been reported over the years in the Reader. I'd like to hear what the neighbors in Encinitas think of all this, and why.

How pathetic! This lady has been a danger and menace to Encinitas for years. Known drug house and supplier of drugs. Lady dies in her house and she gets therapy? Encinitas sheriff dept. has to be the worst police dept in the state and the DA appears to be worthless as well.

Ray, why do you refer to this criminal as a "lady?" She's anything but one. AlexClarke has it much closer to the truth when he refers to her as scum. Note that this sentence for therapy has nothing to do with the fire; this case started well before then. But will we see any more charges? Probably not. This is the DA's best shot.

I don't understand why she gets such preferential treatment. She;s a thug who contributed to the death of a young woman who died in a fire at that house. She jumps bail. and gets light treatment?