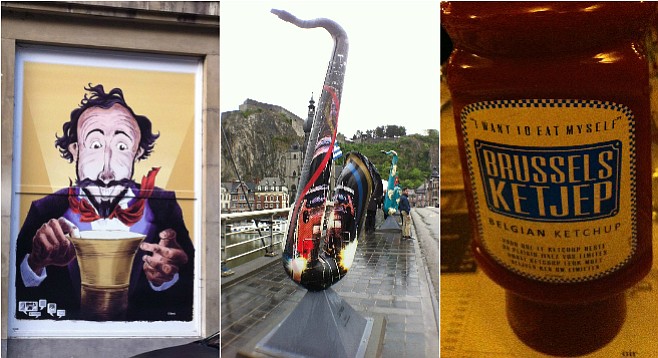 Music-themed explorations in Brussels, Dinant and beyond.

Last year, Belgium celebrated the 200th anniversary of the birth of the inventor of the saxophone, Adolphe Sax. His birthplace and important milestones occurred in the Wallonia (French-flavored) part of the country. It’s his inventions (and he created many more instruments than just his namesake one) that brought about the modern sound of not only classical, but band, jazz, blues and rock music.

It’s not a stretch to say that Sax changed Western music forever. Though some of the specific exhibitions have ended, Belgium’s pride in contributing to music is still apparent throughout the country.

Check out Belgian Railway to get between towns. Certain trains allow you bring a bike onboard. Depending on which town you’re headed to, you’re looking at distances of about 25-60 miles.

I was able to learn about Sax's personal history, with his long-forgotten odder instrumental creations, as well as the largest private collection of saxophones in the world at the Musical Instruments Museum in Brussels. Though the exhibits have changed, this is considered one of the premier music museums in the world. Its location in the repurposed art-nouveau Old England building lends stateliness to the collections. 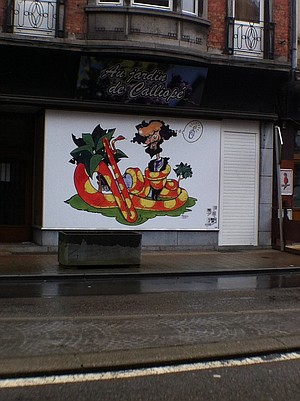 The normally rather cloistered little valley town in the Ardennes where Sax was born, Dinant, really went all-out for the anniversary. Various famous Belgian comic book artists created murals in Sax’s honor all around the city, which you can still see. There are lots of three-dimensional art installations, too. Dinant has a little walk-in closet of a free museum at the site of what was his house, open daily from 9 a.m. to 7 p.m., where you can hear sound snippets. Along the street are signs representing the full range of the many sizes of saxaphones that Sax invented, along with info on what music was composed to go with each. 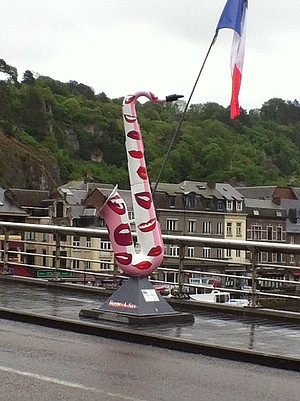 On the bridge crossing the Meuse, there are enameled saxophones – like many metropolitan areas, Dinant has its own enameled theme object. The difference here is, artists from all the participatory countries of the Association Internationale Adolphe Sax have contributed a sax representing each nation. The idea is that each sax is a subtle reference, but I was able to pick out many of the countries: France's romantic kisses, Finland's dark, icy seas, etc. Late to the art party – but very popular – is a brass life-sized figure of Sax sitting on a bench (people like to pose with it) and some abstract metal statues in town.

Whether you climb the 408 steps or take a cable car up to The Citadel, it’s a don’t-miss experience. This natural cliff formation that was built into a defense system dates from the 11th century and has been a museum for over a century. There are historic arms, a recreation of a prison and spectacular views of the city below. This is where people take their photos!

You can’t just study the saxophone – you've got to hear it live in concert. One of the premier jazz fests in the world is the Liege Jazz Festival, where concerts take place across four different venues throughout three days.

Create your own sounds (reservations strongly suggested) in one of Dinant’s oldest standing homes: The Pataphonia Centre. This interactive museum allows you to create music on all the different types of instruments, as well as non-traditional sound effects.

Hear up and coming jazz acts, grab a drink and a snack at Brussels’ Sounds Jazz Club.

If the model and fashion types in the lobby or the Delvaux purses on display didn't tip you off, The Hotel in Brussels has a stylish bent to it. If you're staying in the Deluxe Panorama rooms and suites, you have access to the Panorama Lounge. The serene lounge allows a glorious view of Brussels, both the historic and modern neighborhoods. As you walk in, the most coveted collector's books on fashion, as well as the latest fashion magazines of Europe, are on display and for reading. 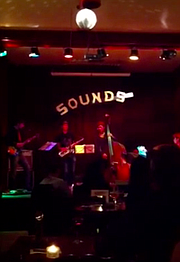 In the hotel, however you dress for lunch at The Restaurant by Pierre Balthazar, you're probably not going to feel up to the chic elegance of the rest of Brussels patrons. But if you're up for losing your self-consciousness, they serve a lunch that's innovative and, well, sensuous. Three international guest chefs were invited by Pierre Balthazar to propose their interpretations of the same basic ingredients: Luigi Taglienti of restaurant Trussardi alla Scala in Milan, Michaël Fulci of Les Terraillers in Biot-Cannes, Oth Sombath of the Thai restaurant Aux Trois Nagas in Paris 16ème. Each chef uses the same nine seasonal products to create a "personal" interpretation. Also, to match that global feeling that the city's earned as NATO's headquarters, they have an international gin and tonic menu.

Castel of Pont-à-Lesse near Dinant has the feel of a luxe vintage resort and it’s a Best Western! There’s an indoor pool, rather rare in Europe. Wooded grounds and country décor add to the ambiance, as well as the grand lounge where you can drink upscale liqueurs. The breakfast buffet features local produce.

Dinant’s La Broche is casual feeling, yet applies special touches with local foodstuffs like putting spicy/grassy olive oil in perfume atomizers. Before my dinner, I was served a gorgeous trio of amuse bouches: egg with truffle and chive, rich with a nice hit of salt; creme brûlée with liver pâté that was a creamy, decadent brûlée; salmon with cheese, zucchini, spices, vinaigrette and parsley.

The valley town of Durbuy is the smallest in Belgium, but has a chic seen-and-be-seen restaurant in Brasserie Fred. It’s not all sizzle: a delightful main course was the asparagus vichyssoise with foie gras, oxtail bits and salmon. The good stuff was in a deep dish while the cold asparagus vichyssoise was poured over. The foie gras had a hint of salt and there were gelée bits in the garnish. It was elegant and light.

Restaurant 'T Kelderke is in the middle of Brussels' hyper-busy Grande Place, yet is a hidden little gem in plain sight. Along with bistro-type offerings, they offer the traditional Belgian specialties, such as 10 kinds of steamed mussels. They serve "stoemp," which is a hearty meat and potato dish, like a Shepherd's pie. They do these many ways, including with white and black pudding, Flemish beef and onion, beef filet and even horse! 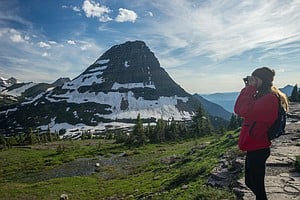