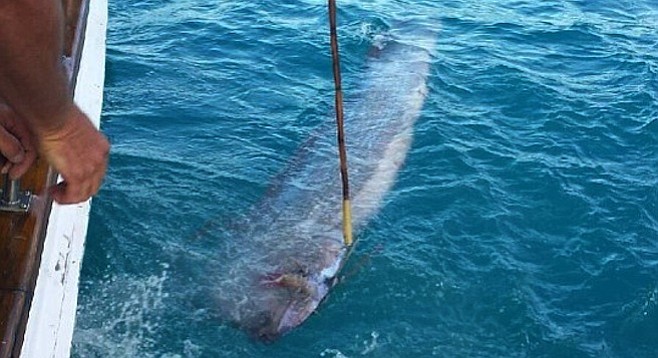 The oarfish is thought to inhabit the epipelagic to mesopelagic layers, ranging as deeply as 1,000 meters (3,300 ft) and is rarely seen on the surface. A few have been found still barely alive, but usually if one floats up it dies. At the depths they live, there are little or no currents and so they build no muscle mass and they cannot survive in the shallower turbulent water.

Yesterday, the sport-fishing vessel Fortune was fishing off Catalina Island when one of the passengers unknowingly snagged an oarfish and brought it to the surface. Even though it was snagged, this is the first ever report of an oarfish caught on rod and reel. That it was in shallow water for an oarfish gives the implication that it was unhealthy. Knowing the fish had little chance of survival, the crew tried to gaff and raise the 20-foot fish to the boat. The soft flesh only tore, and they had to give up the effort.

32 anglers aboard 1 boat out of Helgren's Oceanside Sportfishing caught 80 calico bass and 1 yellowtail.