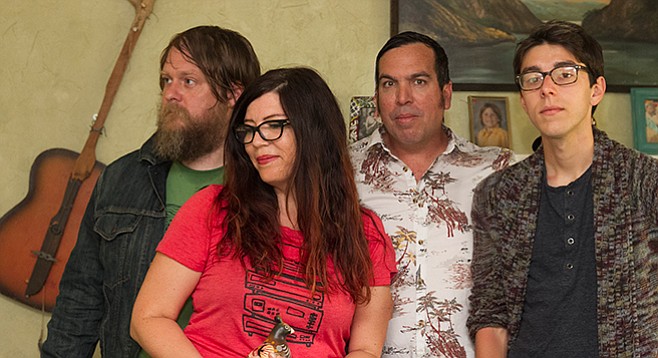 Dave Matthies, the singer/guitarist for the psych-tinged indie band the Gift Machine decided he needed a cyclops monster and colorful swirls coming out of the mountains for the music video for their song “Telemetric Mayhem.”

Song and video by the Gift Machine

So he made them. Matthies’s day job is creating special effects graphics for reality shows.

“Right now I’m working on a 3D big foot with big glowy yellow eyes,” Matthies tells the Reader. “It’s for a show called Alaskan Monster, which is an offshoot of Mountain Monster. Those shows air on the Discovery/Animal Planet channels.”

The best part of his job, says Matthies, is that he gets to work out of his home in the foothills of Vista. But, he admits, he sometimes gets homesick for the creatively fertile Seattle area where he cut his teeth in the ’90s.

“When I was 18, I sang into Courtney Love’s pantyhose,” says Matthies. Love’s undergarments were being used as a microphone spit guard, he explains, the time his teen band Yukon Stove was recording at Word of Mouth studios (Nirvana, Soundgarden, Mudhoney).

“It was an amazing time. Nevermind had come out and they were working on demos for In Utero there. I got to hear all about the Kurt and Courtney drama. It was ’93 and I had just got out of high school.

“Everyone from Seattle was getting signed. The truth is a lot of crappy bands moved there from all over the country. A lot of ex-hair bands from L.A. The truth is most of the guys from Pearl Jam used to be in Seattle hair bands.”

Matthies says he misses the creative environment that nurtured the Melvins, the Posies, Built to Spill, and Matt Groenig.

Matthies says Gift Machine connects with “a bunch of bands based around Spin Records [in Carlsbad], like Sick Balloons, Brando, and Swap Meet. There’s a lack of places to play.”

He remembers 2006, the year he traded the Northwest for North County.

“The last year I was there it rained like 228 days in a row. Not kidding. I felt like I was gonna go nuts. My fantasy is to be able to live in both places.”

Gift Machine appears at 8:30 on Saturday, June 20, at Café Panini as part of the Carlsbad Music Festival. Free admission.