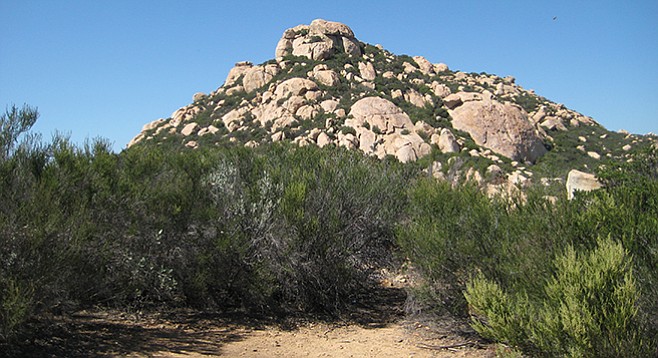 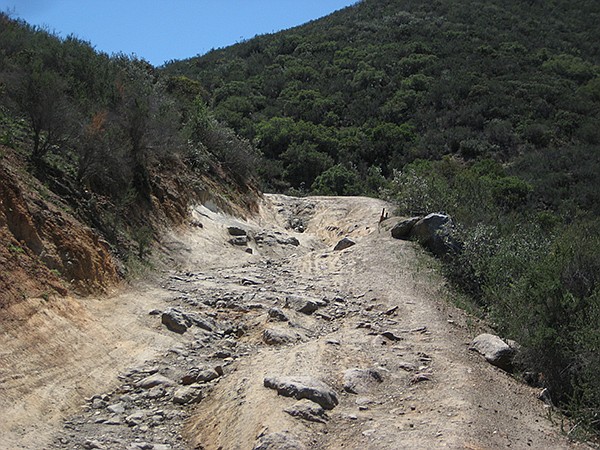 Lawson Peak, at elevation 3664 feet, is one of the 100 peaks (41st tallest) listed for the county by the San Diego Chapter of the Sierra Club. It is also one of a series of three peaks, along with Gaskill and Lyons, located in Cleveland National Forest, that help define San Diego’s eastern mountainous skyline. In addition to peakbaggers, Lawson is also popular among rock climbers who enjoy the challenges found on the large granite boulders that make up the summit area. Off-roaders particularly like the challenges found on the rutted Carveacre Road, beginning from Japatul Road and climaxing with a climb up the granitic face of Pancake Rock. Lawson Peak is named for John Lawson, a settler who had his own post office from 1890-1891.

The trail starts at mile marker 13 on Lyons Valley Road, where an old, dirt jeep road starts. The road is shared with adventurous off-roaders so be aware that there may be encounters with several four-wheel drive vehicles. The first two miles follow the steep climb of the deeply rutted jeep road and then descend slightly to meet Wisecarver Road, another dirt road coming from the left. Nearby is the large granitic slab known as Pancake Rock. Straight ahead is the massive granite pile that is Lawson Peak. 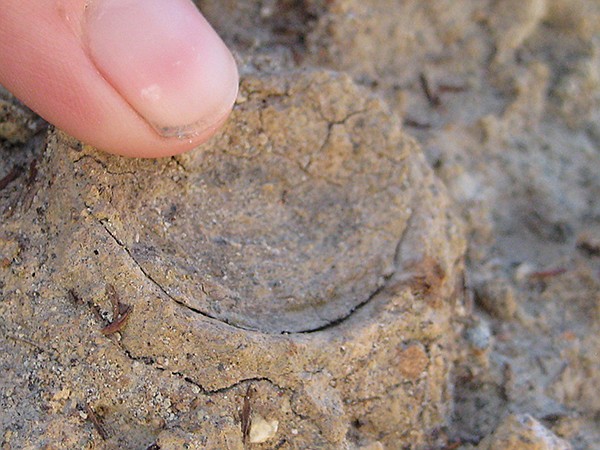 The California trapdoor spider keeps his door closed most of the time.

Along the way, look for California trapdoor spiders that are prevalent on the slopes on the side of the road. Related to tarantulas, they are ambush experts who wait by their open door for insects or other arthropods to capture and take down into their tube-like burrow to eat. Their doors are closed most of the time.

Take note of the chaparral hillsides on the way up, and listen for the tell-tale song of the “voice of the chaparral,” the native wrentit bird. The small, dull, grayish brown wrentit may be difficult to see among the thick chaparral, but its series of “pit,” “pit,” “pit,” sharply whistled sounds, all in the same pitch and increasing rapidly, followed by a descending trill, is easily recognized. Some describe the sound as a ping-pong ball falling on a table. The wrentit is not closely related to any other North American species and is the only species in its own genus. Its name even indicates some of the controversy of how to classify it as the name combines wrens with tits — it is not related to either but has external resemblances to both.

Once past the dirt road, the real climb begins through low brush and over boulders up to the peak. This is prime rattlesnake habitat, so keep a sharp eye out where you place your hands and feet. This area of the Cleveland National Forest is a highly sensitive wildlife area because surrounding peaks are nesting areas for prairie and peregrine falcons. Call the forest service office to see if there are any issues, especially in spring during raptor nesting.

Continue bushwhacking up the trail to the summit block where a narrow, vertical rock cave is found. To reach the top boulder, it will be necessary to climb up and through the cave to reach a broad shelf on the summit. It will require reaching for a ledge and pulling one’s self up. This is a 4th class chimney in rock climbing terms. Be aware that while this is a popular spot for rock climbers, some of the bolts left behind might be years old and may not be secure anymore. Don’t attempt the climb to the top shelf unless you have experience doing some climbing. Once up, reaching the topmost boulder will be easier. 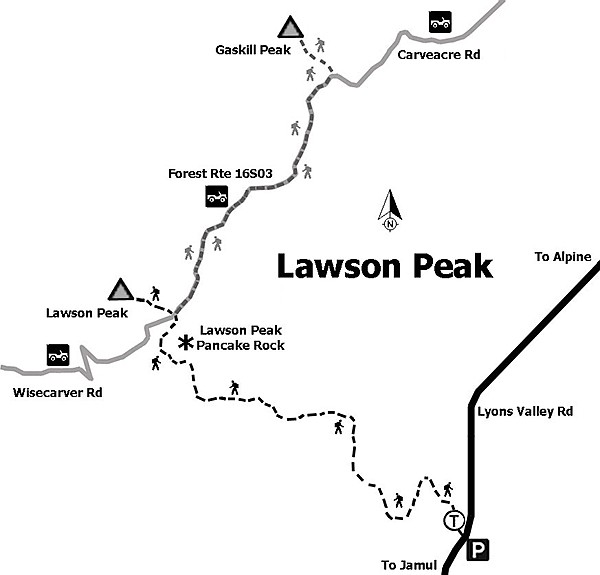 The view from the summit is spectacular. Surrounding peaks include Gaskill, Lyons, Tecate, Corte Madera, and beyond to Mt. San Jacinto, San Gorgonio, Mt. Baldy, and Mt. Cuyamaca. To the west lie the city of El Cajon and the Pacific Ocean. There can be gusty winds toward the top and it may be cooler. Dress accordingly.

For those looking for more mileage and adventure, an option would be to return to Carveacre Road and follow it north a half-mile to find the trail up the south ridge of Gaskill Peak. This peak requires rock climbing to reach the top. Although higher in elevation than Lawson Peak, the view is not as spectacular. Retrace your steps to return to your vehicle. The best time to visit this area is between November and May when it is cooler, although it may be climbed any time during the year.