Rise through the morning mist to bag Sycuan Peak, near Alpine and Jamul.

Sycuan Peak, midway between the inland communities of Alpine and Jamul, rises 2801 feet above sea level and overlooks miles of thinly populated valleys and hills. As part of a countywide effort to preserve native sage-scrub and chaparral habitats, much of the mountain's higher slopes are being managed as a California Department of Fish and Game ecological reserve. Hikers are welcome to try the single trail that darts up Sycuan's south slope. You'll waste no time in climbing a vertical 800 feet over the one-mile length of this trail.

May and June mornings here often start with a thick layer of stratus clouds hugging the coast and extending inland to as far as Jamul and Alpine. On such mornings you may have the pleasure of punching through these soupy, flat-lying clouds as you climb, emerging on top in full sunshine.

Find the trailhead by following Lyons Valley Road east from Highway 94 in Jamul. Your car ascends gradually at first, then labors as the main road becomes the straight-but-steep Skyline Truck Trail. (The old, curvy Lyons Valley Road branches right and later returns to Skyline Truck Trail, a worthy alternate route for sightseeing.) Beyond the first summit on Skyline Truck Trail, make a left on Lawson Valley Road. Wind about on this road for 2.5 miles, observing the mix of older ranch properties and the newer estate-style housing that's popping up nearly everywhere out beyond the county's suburbs. At a point 100 feet past the 2.5-mile marker on Lawson Valley Road, note the rough road ascending on the left side. Park wherever the road shoulder is wide enough to accommodate the width of your car, and head on foot up this rough road.

The low-growing chaparral vegetation hereabouts allows unobstructed views that get more panoramic as you are ascending on the old road. At one spot the roadbed becomes severely eroded, but you can bypass that nasty section on the right side. If you find yourself immersed in the early-morning cloud cover and there's nothing to see, just take pleasure in the distant, plaintive cries of peacocks rising from somewhere down below. Nearing Sycuan's summit, the ineffably fragrant scent of Cleveland sage suffuses the air. You may find some still-flowering specimens of this grayish plant right alongside the trail.

An airway beacon stood just west of the summit in the 1950s, when the peak was labeled on maps as "Sequan Peak." Disused electrical lines installed to serve this facility still climb to the summit. A visual survey from the topmost boulder on Sycuan Peak reveals nearby Loveland Reservoir in the northeast, Lyons Peak looming in the southeast, and (when the mists clear) a big chunk of the urban area to the west. 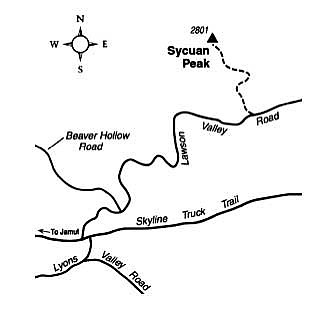