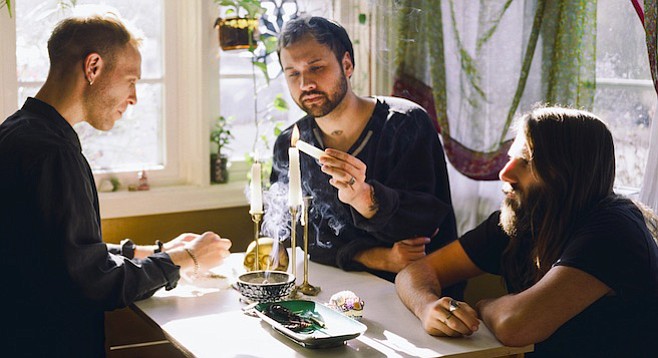 In 2010 a singer/songwriter and guitarist named Ruban Nielson posted an original track to his Bandcamp site. Pop music bloggers got their hands on it, reposted it all over the internet, and due to the strength of the song and the utter poverty of information about Nielson, put some effort into tracking him down and finding out who he was and what he was all about. In the technical sense of the word, Nielson probably didn’t have a band at that time, but he supplied a persistent reviewer with a name anyway: he called it the Unknown Mortal Orchestra.

From Unknown Mortal Orchestra's album of the same name.

UMO is at present three guys — Nielson, along with Jake Portrait and Riley Geare. What they present is a body of music that is rich in the psychedelic tradition, but not fake psych or the usual junk made with a bunch of retail effects. UMO is psychedelic rock that is overwhelming and slightly terrifying in the way of the true head trip. Nielson, an Oregonian by way of New Zealand, should know. He is said to be a user of a broad range of exotic substances, and the authenticity makes for an interesting dynamic. A fan would like to think that if the Beatles had ever followed any one thread, Sgt. Pepper’s, for example, that they would have eventually made records like the ones that Nielson’s Unknown Mortal Orchestra records.

The band’s third studio release came out in the spring of this year, and according to the rock press, this is a band that can do no wrong. Still, UMO is one of those stories of no publicity and no major press campaign, but with product that somehow landed on the right (virtual) desks. Why all the secrecy around Nielsen and the band? Are we looking at an annoying campaign designed to go viral? If so, mission accomplished. But really, who cares? The songcraft is brilliant, and UMO records approach a kind of perfection.