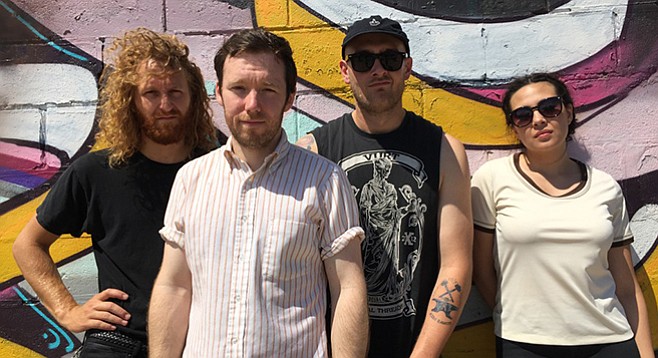 “A few steps behind the times” is how one reviewer describes the band American Wrestlers; the comment is spot-on. Who uses a drum machine anymore, right? Or, a timeworn tape recorder? There are a few holdouts, and Gary McClure’s one of them. That’s how he recorded his first couple of albums just a couple of years ago. He wrote the songs, sang all the parts, and played all the instruments. He self-released in the manner of virtually all anonymous startups — thousands upon thousands of them every year — on a fan website for musicians called Bandcamp. But shortly after, the unexpected happened to McClure. It was the one thing that possibly every independent musician prays for.

Gary McClure is actually a Scottish musician. It was an American musician named Bridgette Imperial who enticed him to come to St. Louis, MO. They married, and he went to work in her home using an ancient eight-track tape recorder. He made a couple of albums all by himself. And then one day, Fat Possum Records heard his self-titled debut recording, re-released it, and granted him a record deal. Suddenly, McClure needed an actual band.

Imperial’s now a member of American Wrestler. She plays keyboards. Along for the ride is bassist Ian Reitz and Josh Van Hoorbeke on drums. McClure fronts the band on guitar/vox. Fat Possum has American Wrestlers out on the road in support of their 2016 label release Goodbye Terrible Youth. The music? Not too challenging. Pretty much your basic plug-and-play garage rock and roll as interpreted by a Scottish indie-rocker. Nothing different to be had here, just well-crafted songs and a loud, rocking good time. In a way, it’s still valid, the DIY approach to making rock and roll with lo-fi trappings. And as long as there are thrift stores to sell antique tape recorders and people willing to repair them, I suppose it will continue.