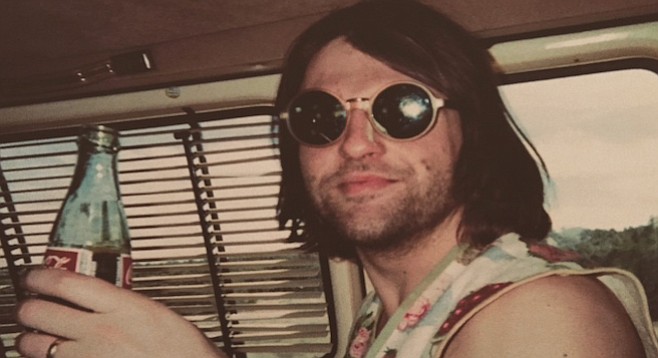 Portlandian touring through town with his second set of psych-folk, Natural Changes

Starlit has been called one of the best new releases to come out of Portland in the past year. The song collection centers around Jackson Boone’s new-found sobriety, they say. Whatever. Here is a singer/songwriter in the psychedelic pop-rock tradition who is still very much in touch with the concept of acid daydreams. After a listen, I fantasized that the Beatles were road-tripping with Jimi Hendrix, Donovan at the wheel, and that the six of them were writing songs. Boone in turn supports his slick Fab Four harmonics with classic Jimi riffs.

...off of Jackson Boone's Natural Changes

But the unnerving thing of it is that Boone’s tracks all actually sound as if written and recorded during the 1960s. Older listeners will feel right at home, while the youth among us will think this stuff is brand new.

But then again, that’s the beauty of music: it always sounds new to somebody, right? Jackson Boone is a brand name in Portland nightclubs, where his grandson-of-a-hippie act and his band’s vintage gear and their liquid-light shows are a hit. He has a daughter named Aura and claims that astrology informs his songwriting.

After tracking Starlit in a basement in Portland, the entire band packed up and went to Boone’s grandfather’s beach house, where they promptly recorded Natural Changes. Boone and his four–piece are just now heading out on a modest tour and by the time they get to San Diego, album number two, Natural Changes (recorded during the time of the last lunar eclipse) will have been released. He seems right out of high school, Boone does, but in truth he’s been in the business for a dozen years, peaking in a band you may remember called Tantric Picasso. Otherwise, Boone’s never really gotten much more than regional attention. Maybe this is the tour — and the music — that will change all of that, if the planets align.