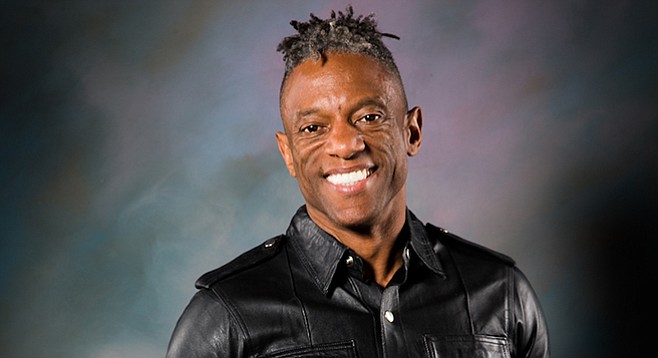 Earl Thomas, back from Europe (again)

"He admitted to me later that they had trashed the room."

Earl Thomas, the soulful belter from Pikeville, Tennessee, who started singing the blues locally after getting kicked out of the Navy for being gay, has released 15 albums. He has recorded with the late BB King and written songs that were performed by Etta James and Tom Jones. He makes his money fronting his own band which tours Europe five or six months a year.

“That all started because I got to play the Montreux jazz Festival [in Switzerland] in 1992,” Thomas said while riding an Amtrak from L.A. last week. He was returning from LAX after a tour that took him to Finland, Denmark, Belgium, Spain, and the UK.

During his 25 years of touring overseas, he’d usually rely on European pickup musicians. But last year he toured with a backup band he met in Portland.

“We were touring ten countries,” said Thomas. “By the third country, I learned these guys were alcoholics. Not heavy drinkers, but full-on alcoholics…. One night in Spain I saw one of them in the lobby handing this guy from the hotel all this money. He admitted to me later that they had trashed the room and he was paying for damages. I was raised surrounded by that kind of alcoholism. That’s why I know when it gets that bad you cannot forgive. You cannot trust them. It’s out of the question.”

Thomas fired them right before a ten-day break. He came back to San Diego and decided to recruit a quasi-all-star band to finish the tour, including members of Sol e Mar, Second Cousin, the San Diego Zoo Chameleons, Soul Ablaze, and Jimmy Ruelas. The six-man band just returned from their second European tour with Thomas.

Thomas will next perform at Winstons (with the Roving Marauders, 5–8 p.m. Sunday), the place that launched his career 30 years ago.

“I tried out for the Rhumboogies at Winstons in 1987.” He got the gig (the late Candye Kane also tried out) and fronted the band most every Sunday for eight years.

Mr. Thomas says the phrase "pickup musicians" is not correct. Although he says he has in fact used picked musicians on both sides of the Atlantic, he now relies on specific, preexisting bands to back him when he tours Europe. He points out that he has long term touring relationships with BANDS rather than individual members including: