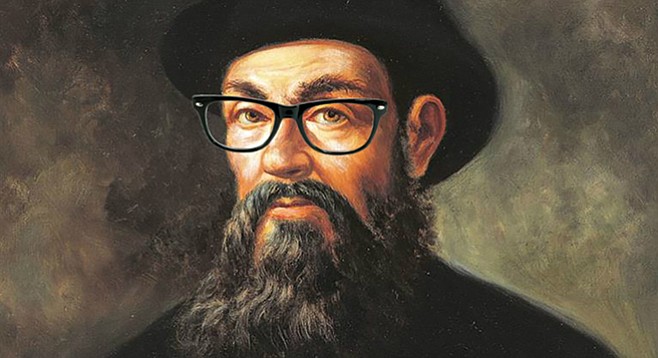 How to find the true north that isn’t a bar

How do I find true north? It’s not like I think I actually need survival skills for my occasional camping trips in East County, but it would be cool to know. Obviously, I mean without a compass. And without using a compass app, either. Or a GPS.

During the Age of Hipster Exploration, which some people refer to as “the late 2000s,” adventuresome hipsters sought a mythical Northwest Passage. Hipster cartographers of the day postulated a direct, overland route from Brooklyn, New York, to Portland that would bypass the flat, mostly agricultural territories between the two major cities. In those days, the prohibitive costs of transporting Stumptown Coffee to Williamsburg cafés incited a mob of seven or eight hipsters to put on Cleveland Indians jerseys and ironically dump coffee grounds off the Brooklyn Bridge. Allegedly, a passing bicycle cop threatened to, “Write them all tickets for littering if they didn’t get their hipster asses off the bridge by the time he rode by again.” Struggle is real.

Many hipsters failed to complete the Northwest Passage and found themselves stranded partway through the voyage. Some say this is how the hipsters first landed in places like Milwaukee and Minneapolis–St. Paul, though the locals disagree, claiming a native hipster population unpolluted by coastal hipster exploration. Though they never discovered the mythical overland route to Portland, those legendary hipster explorers agree that packing up the VW Westfalia with 2–4 of their closest friends was a great idea, and that the memories encapsulated in the Tumblr photoblog of the journey will last a lifetime.

Wherever they went, those brave and pioneering hipsters relied on a hipster mariner’s trick to find north, even when their iPhones ran low on batteries. It’s said that experienced navigators could use the magnetic qualities of extra-hoppy craft IPAs to fashion crude compasses for road trip navigation. Sadly, the art has been lost in the era of the modern hipster.

I’ve heard that it’s possible to determine the cardinal directions by planting a stick in the ground (about 2´–3´ high), marking the ground at end of the stick’s shadow, waiting 15 or 20 minutes, marking the end of the shadow again, connecting the two marks with a line that will determine your E-W directions, and then drawing a perpendicular line to establish N-S; but who has time for that?