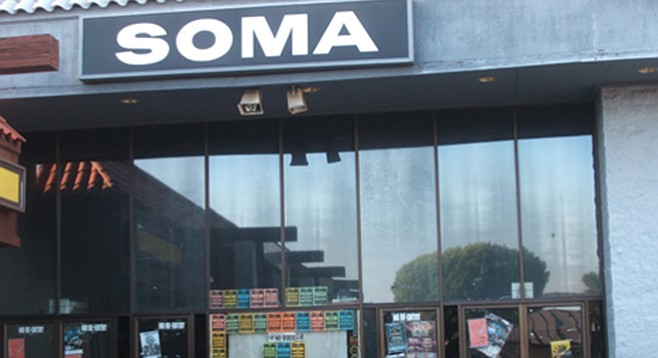 Soma did not serve alcohol when it opened in downtown San Diego in 1986 or when it moved to a Bay Park warehouse in 1994. The all-ages/no-booze policy continued when Soma moved to a remodeled multiplex theater near the Sports Arena in 2002. As headliners came through (blink-182, Rocket From the Crypt, Fall Out Boy, the Ramones, Lamb of God, Pierce the Veil, Stone Temple Pilots, Switchfoot, As I Lay Dying), Soma stayed all-ages and alcohol-free.

Soma’s business model accommodated music fans who had to deal with San Diego’s longtime alcohol policy that prohibited fans under 21 from mixing with imbibers over 21.

According to Soma owner Len Paul, in 2014 the San Diego Police Department instituted a more liberal alcohol policy, and Paul says that is not good for the teens.

“For 30 years, the City of San Diego has not allowed anyone under 21 to be among those drinking over 21...now you can have a 13-year-old girl get right up next to a 21-year-old kid who is drinking a beer.”

The first change in policy started at the House of Blues a few years ago, when the San Diego Police Department allowed the under-21 crowd to come to a concert where alcohol was served but were kept on a separate floor from the alcohol service.

Paul says that “keep-’em-separated” plan was a smart way to keep under-age kids from drinking.

But Paul says last year everything changed when the Observatory/North Park Theatre was given permission to mix drinkers with under-age patrons.

“And then the House of Blues came along and said, ‘If they can do it, why can’t we?’” Paul says he will continue to protest about this new age-integration policy.

Calls to the House of Blues were not returned.

Operations manager at the Observatory North Park, Ryan Blank, says colored wrist bands determine alcohol access at all-age shows. “There is a zero-tolerance policy regarding under-age drinking...if a ticketholder under the age of 21 picks up an over-21 cup, they are immediately escorted out of the building.”

The San Diego Police Department’s media officer, Mark Herring, says the officer in charge of the new licensing was out of town and could respond next week.

“My days with all-age venues are over,” says Brian Witkin, owner of Pacific Records, which has a roster of 30-plus artists and happens to be located behind Soma. Witkin worked for more than five years at the all-ages Epicentre in Mira Mesa. “If the House of Blues breaks even at the door, they can count on the extra revenue from the bar. I would never have a venue that didn’t sell alcohol.”

A different promoter thinks it’s about time venues enjoy the age-integration policy that has long been used in Orange and Los Angeles County music venues. “It’s the same story...an 18-year-old kid can’t get in to see a Belly Up show. It’s never been that way at the Roxy in L.A. or the Observatory in Santa Ana.”

the full statement from Ryan Blank:

“We are making a concentrated effort to be different from our Orange County venue. Observatory North Park is a performing arts venue, not just a concert destination. Our calendar is filled with comedy shows, theatrical performances, community events, along with concerts. Therefore, we differ that way from venues such as House of Blues, Belly Up and SOMA.

When it comes to our “all ages” shows, our security separately IDs everyone at the door. A wristband is provided to ticket holders over 21 and a separate-colored wristband is given to those under 21. Our security that circulates throughout the building is constantly checking that no one under 21 is drinking alcoholic beverages. Their sole job is to look for anyone who is possibly drinking underage.

We also provide different colored cups to differentiate between alcoholic and non-alcoholic drinks. There is a zero tolerance policy regarding underage drinking at the theatre. If a ticketholder under the age of 21 picks up an over 21 cup, they are immediately escorted out of the building. In addition, if a ticketholder shows up to any of our scheduled events intoxicated, they will not be allowed in the building.

We believe that as a performing arts venue, the arts should be available to everyone, and just like other “all age” venues across the country, we are taking the necessary steps to assure that our guests enjoy every performance in a law-abiding manner.”

So what's to stop an over 21 patron from simply pouring their drink into the cup of a minor?

xians421: that happens to be a very good question. But the reality is, Orange and L.A. Counties (and "the rest of California" one local insider told me) has managed to do business this way for years. There are some realities here. The Belly Up seems to be doing just fine doing 21 and up and in my opinion probably would just as soon not let in the under-21s so as to not expose them to the under age drinking risk (just an assumption...I could be wrong). But the more competitive HOB and Observatory North Park apparently want to mix in under 21s for 2 reasons. One, because their total amount of tickets sold will increase, and also because agents and band managers generally don't want to keep their artists away from the under 21 crowd. In other words, if both venues are fighting for a certain band to come play at their venue, the one that will let in the 18-20 year olds may have the edge. Without getting any kind of official comment, it seems to me the Belly Up is happy with its older clientele. Then again, if it puts them at a disadvantage in getting the acts they want, that may change. This is all just speculation.