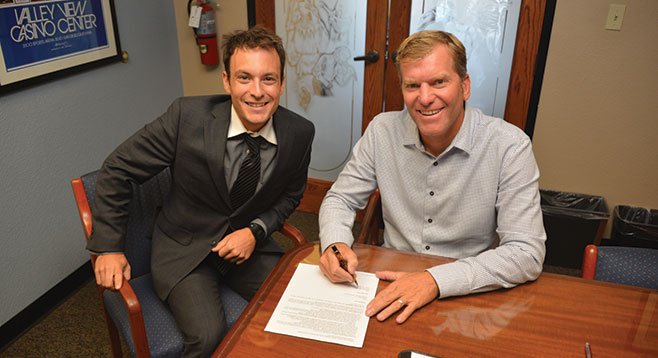 Want to play the arena?

San Diego’s live-music venue options have been shrinking over the past five years. Bucking that trend is the arrival of a new venue — within a venue. While it still does not have an name, the 200-capacity backstage VIP Lounge at the Valley View Casino Center is about to start hosting local bands.

The arrangement follows an agreement between long-time Valley View Casino Center/Sports Arena vice president/general manager Ernie Hahn and Brian Witkin, founder and CEO of Pacific Records, a record label based in nearby offices behind the all-ages SOMA nightspot.

Witkin says the two have yet to settle on a name, but he says one could be “the Ramp,” the arena’s cement incline where touring bands load in. That ramp was featured prominently in the movie Almost Famous when local rock writer Cameron Crowe and various groupies got backstage access. The lounge is adjacent to the ramp as you enter the building.

Witkin will provide bands to play the lounge during major concerts as well as during off-nights, when Hahn and Witkin hope to develop a stand-alone venue.

“One of the neatest things the bands get out of this is they get to say they were opening acts for the headliners,” Witkin tells the Reader.

Witkin says that within six weeks he hopes to have the venue up and running as a stand-alone nightspot.

“We eventually want to have entertainment every night of the week,” says Witkin, a 28-year-old Torrey Pines High graduate and former assistant manager of the all-ages Epicentre in Mira Mesa. Witkin says the new venue will be for those 21 and up and that he wants to hear from all artists who want to play both the VIP shows and the regular nights.