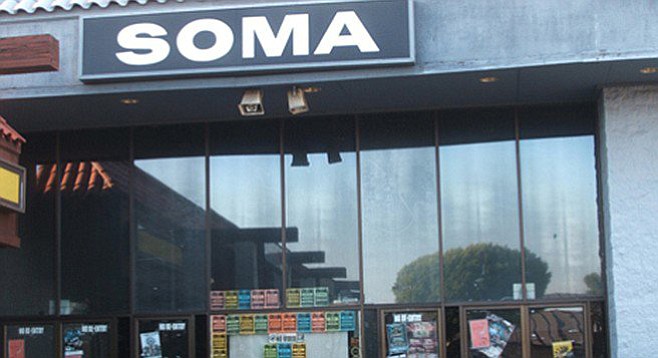 After 30 years, the all-ages place opens up some beer space

After 30 years as an alcohol-free establishment, Soma, the all-ages rock venue that played a role in launching local bands Blink-182 and Pierce the Veil, just hosted its first show serving beer.

Soma owner Len Paul said the sold-out Descendents show September 22 was an experiment to see if he wants to apply for a beer-and-wine license next year.

“I wanted to try it out, see how it felt and the best way to do it,” Paul says. “We wanted to test the waters and see how it went. It went flawlessly.”

Paul says that a one-day alcohol license for the Descendents show was secured by ARTS (A Reason to Survive), a National City charity that helps youth with exposure to creating art. He says ARTS hired a bar service company.

“Arts kept all the proceeds from the beer sales,” says Paul. “I think they made over $4000. St. Archer dedicated 80 percent of the beer.”

The next two Soma beer shows are also fundraisers.

Electronic DJ GRiZ appears October 15 and French electronic artists M83 are set for October 29. Those shows are presented by outside promoters, AEG and Tim Mays, respectively.

He says that about one-third of the Descendents fans, around 800 people, were given wrist bands allowing them to drink.

Paul says that when the city allowed House of Blues, the Irenic, and the Observatory to host all-ages shows with booze service, he had to consider embracing the hops.

“Unlike those other places, we will not be serving hard liquor. Only beer.”

He says attitudes have changed in San Diego since Soma first opened downtown in 1986.

“The police actually were the first ones to suggest we go that route,” says Paul.

He says that if he does seek to get a permanent beer license, he would do so after the first of the year. “We hope to get community support.”

He says his license would allow him to not sell beer on certain nights and still use the side stage for local shows.

“We will still do eight to ten local shows a month with at least five bands on each show. Focusing on young bands has always been our business model and that will stay the same. No one else has really been doing that in San Diego.”

While Soma is currently in the middle of a three-month “busy season,” he says 2016 was not that good. “In the spring and summer a lot of bands we would normally get went to the big festivals.”