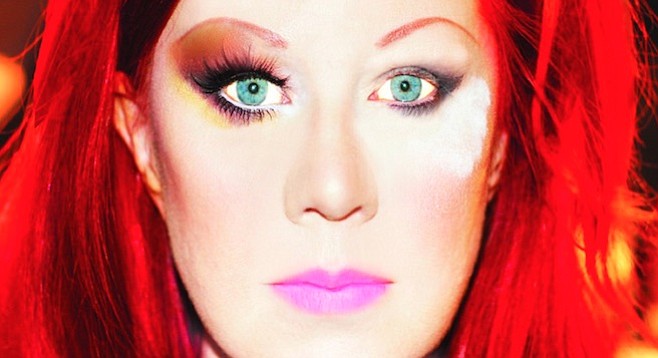 “Mister Sister,” hymn to a cross-dressing or possibly transgendered “you” who escapes to “everyone’s party wish list,” makes even more sense in the wake of the Surpreme Court decision in June, which applied specifically to same-sex marriage but passed the rainbow around for everybody to melt into — this year’s Pride Parades had everybody on their feet who still had feet. Kate Pierson’s repeating “nothing hurts/ when you are a beautiful girl,” though, holds out some bittersweet. That pain of being rejected by the mirror, and by everyone s/he (or other) grew up with, won’t fade completely. That’s what anybody who cares must face.

Fair enough, since so much of the B-52s singer’s solo set revolves around positivity activism, “Throw Down the Roses,” pushing with acoustic piano stabs at participation, not veneration — “I don’t ever do/ Rocker boys like you/ I’m an artist too/ I’m a show stopper.” Or to borrow a longstanding line from a certain Dr. Furter: “Don’t dream it, be it.”

It’s no B-52s album, although collaborators Sia Furler and Tim Anderson swap around various vintage stringed axes, and various later-vintage synths. Like a B-52s record certain odd parts suggest opera — opera heard long ago and perhaps confused with Yoko Ono. So the substantial difference lies in the broadening of moods found first in the singer’s old band. 1979’s horrifying “Hero Worship” expanded and deepened over three or four tunes. Still: “You and I stand alone/ With nothing to fear/ As long as we’re together/ When the end is near.”