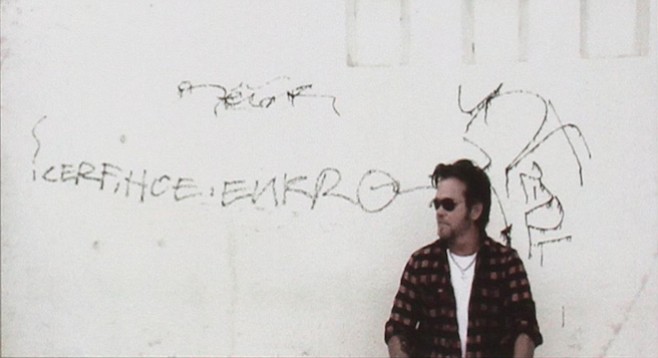 That leadoff track adds up everything in its unequal-length verses, the pieces of a life, the happier bits fallen out, rotten pieces in a too-humid jigsaw — and every equation equals no peace. That’s the algebra of the fallen, or the ones who just fell out in the first place. “Sometimes There’s God” plays with the binary, he’s up there or he’s not up there, and its “forgiven” cannot, contextually, exist on the “not” side.

Unless humanity fills in. And that’s what has to happen to keep someone listening to this record from breaking a window and using the shards. Out of loneliness. No one, according to the credits, produced this album. Mellencamp plays nothing, except maybe the equally uncredited harmonica. The cover shows him to scale against street graffiti, crude and seemingly nonsensical — a cipher minus key. On the back someone’s written a poem to a woman, I think. The poet doesn’t seem confident he’ll get through. Sung lyrics reaffirm all that. The singer’s in the company of cowards. He’s probably the “Mister,” isolated, quitting a lover he couldn’t appreciate in the first place, because he can’t appreciate the world, full stop.

So show thanks for gentle, sparse, guitars entwining. For organ biding its time like a long smile deep in the mix. That open-prairie harmonica. Tubs subtly thumped. Words may hold no hope, then — but deeds, the praise to the world that hands make, still make beauty. We used our hands before language. And we put them together before music.