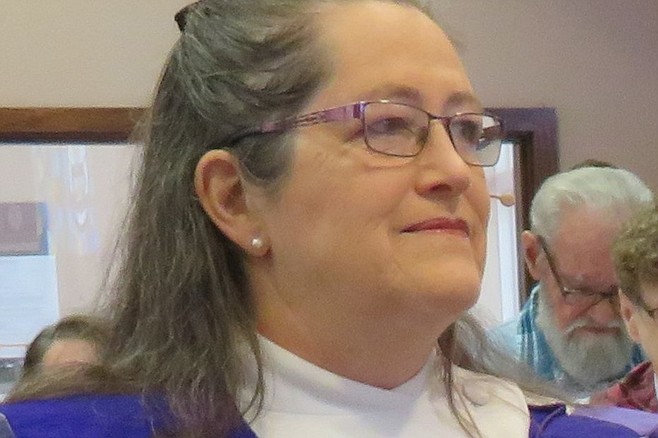 God found in the engine room of Navy ships

“It was a man-made creation, but there was a sense of being in the middle of it all”

San Diego Reader: Why did you become a minister?

Karla Seyb-Stockton: Throughout my life, I realized that many people did not take seriously the voice or perspective of the youth in congregations. So I thought that as a member of the clergy, I could be a better advocate for youth as full participants in the church today—rather than being just the future of the church sometime later. There was no exact moment when I knew I was going to be a minister, though; it just came upon me like the dawn—slowly but surely. But there was a precise moment when I realized being a Navy chaplain was my calling. That’s when my boyfriend proposed to me, and he was in the Navy. I realized I wanted to be with him. We got married and I was in seminary when we got married, and I interviewed some military chaplains at that time. More and more I felt, “This is my calling,” and I said God had to hit me over the head with a sailor or I would have never figured that out. So we both ended up having full careers – my husband was in the Navy for 31½ years and I was in more than 20 years.

SDR: What is the mission of your church?

KS: We want to be a place where people could come, be accepted, know God’s grace, and be part of a community where you can sort out what you believe. When you come here, you don’t have to have all your beliefs figured out. Our mission is to make our little corner of the world a better place through the members of the congregation.

SDR: Where is the strangest place you found God?

KS: I found God in the engine room of the ships I was assigned to in the Navy. There’s a feeling of being in the center of it all—with this total rhythm, with everything being in balance… It was a man-made creation, but there was a sense of being in the middle of it all. I also found God up on the bridge or places on ship out where you can look at the stars at night, or look at the ocean. Sometimes it was in the passageway because I was talking to a sailor who needed to work something out. I also saw God in the face of this tattooed rough-and-tumble sailor who would probably never darken the door of a church.

KS: I believe you go straight into the arms of God’s mercy. I may be surprised, but that’s what I think. Scripture tells me over and over again, that God’s mercy is sufficient. If someone is going to be in hell, it’s right here on earth, and sometimes it’s because of choices other people have made, and sometimes it’s because of choices individuals have made themselves. But if there is someone who completely says, “I don’t want you God, and I don’t want your love or your mercy,” that would be a hell of their own choosing. But I can’t imagine anyone saying that when they realize what that really is. Many people have misconceptions about what God’s love is, and that’s why it’s so important for me to preach it.