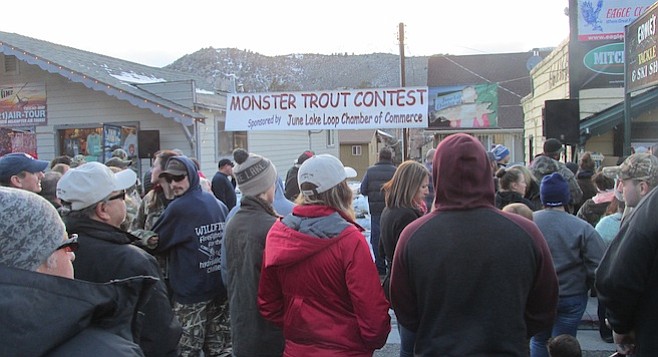 Six inches of snow on opening day of trout season

The Eastern Sierra trout opener on April 25 turned out like last year — a predicted record opener, then a spring snowstorm dumped six inches, and seemingly ruined all the big fish hopes and expected T-shirt weather.

In the early morning hours, as fisherman were lining the shores of High Sierra lakes from Bishop to Bridgeport, waiting for the official 5:11 a.m. start time, snow started falling around 4:00 a.m. And didn’t let up until late afternoon. By that time the fish were hiding in the colder, deeper water.

At Silver Lake, on the June Lake Loop, with over 40 poles in the water at The Point, only two fish were brought ashore in the morning hours. But both were over two pounds. It snowed on and off throughout the day forcing many off the shore or out of their boats, back into warmer accommodations.

It was a great day however for a City Heights eight-year old. Isabelle Pardee pulled in the winning trout for Silver Lake in the June Lake Loop Monster Trout Contest.

Fishing from shore near the boat launch at around 11 a.m., Isabelle hooked up a rainbow weighing four-pounds, nine ounces, using purple Power Bait. “It was dipped in our secret sauce,” said dad Eric. While not disclosing the ingredients, Eric said, “It’s the kind you keep in your hot attic for six months.”

Her pole had been out for about 45 minutes when dad Eric said she should check it. The big fish hit as she picked her pole up to reel it in.

Isabelle was the only San Diegan to place in the four-lake contest hosted by the June Lake Loop Chamber of Commerce. It was Isabelle’s fifth opener.

2015 trout opener in the Easter Sierra

Gull Lake lived up to its moniker Home of the Monster Trout, as anglers pulled in three, seven-plus pounders for the weigh-in at Ernie’s Bait and Tackle. J.D. Bronson of Murrieta took the biggest prize, the largest trout caught in the loop’s lakes and streams, at seven pounds, twelve ounces.

Among hundreds of San Diegans making the pilgrimage and the seven-hour drive, none I spoke to complained about the weather or the bad fishing. “It’s a tradition after all,” said former Orange County resident, Francie Fishers, who drove in with her husband Tom, from St. George, Utah, for her 44th consecutive opener.