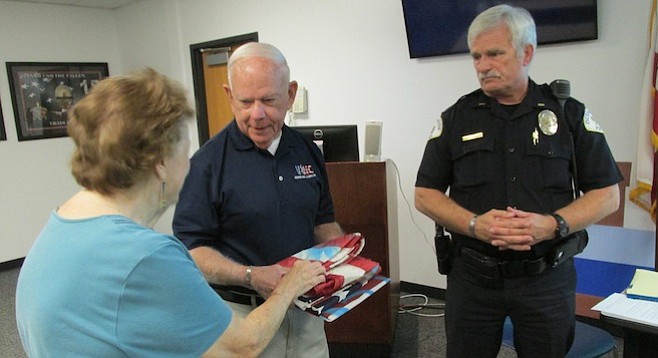 Three victims of graffiti and vandalism that struck an Oceanside neighborhood have finally seen justice served, and their property — American flags — returned.

Last July 17, neighbors in the Oceana community, Virgil Hardin, Michael Rank, and Nancy Connor, all had their American flags spray-painted. The flags had either a tagging crew’s initials or “Fk USA” painted on them.

Oceanside Police Department’s Lt. Leonard Cosby, at a flag-return ceremony on April 30, said his department took the defacing of American flags seriously. “This is a military town. The American flag has great meaning to all of us,” he said.

The three flags, taken as evidence, were returned to the victims in a moving ceremony. Police Chief Frank McCoy thanked the local media in helping to keep the story in the spotlight. People called in thinking they recognized the perpetrators in pictures and video released by the department. 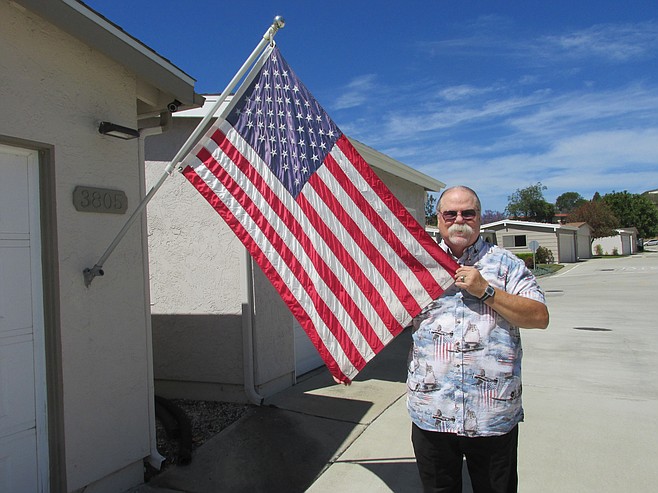 Oceanside's Michael Rank shows off his replacement flag. The security camera mounted above the flagpole helped police find the vandals.

All three victims had already had their damaged flags replaced by veterans’ groups around North County. Hardin, a WWII vet, Rank, from the Vietnam era, and Connor, whose two uncles served in WWII, felt honored that the police spent so much time keeping them in the loop.

Defendant Rubin Isaac Jimenez received the stiffest sentence of the three: 32 months in prison and he has to pay $1000 in restitution. The other two perpetrators, a male and female, received credit for time served in jail and have to pay fines and restitution.

At the ceremony, the victims’ damaged flags were given to Chuck Atkinson, president of the Veterans Association of North County. His organization will properly retire the damaged flags, by burning, in accordance with U.S. law.

If they were all 18 years old, why is only one of the persons convicted identified?

I think the names of all those convicted needed to be mentioned. And their citizenship or immigration status noted, too. Then readers of this blog piece could reach their own conclusions.