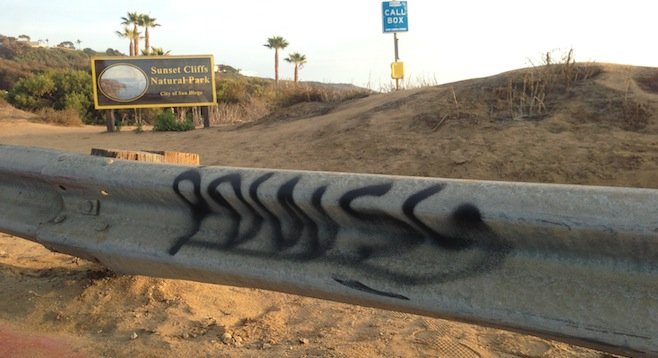 Sunset Cliffs — whose paradise is it?

Graffiti vandalism and recent attack on teen have some wondering

Following a month that saw a violent carjacking and excessive tagging, residents of the normally quiet neighborhood of Sunset Cliffs have been left to wonder whether urban blight is going to be a persisting problem at their scenic perch at the edge of Point Loma.

On the evening of February 8, a 17-year-old male was allegedly pulled from his car and beaten in the dirt parking lot of Sunset Cliffs Park, located just south of Ladera Street. Between six and eight unknown assailants in their 20s, male and female, drove away with the boy's car, then ditched it around the corner, indicating theft was not their primary motive. 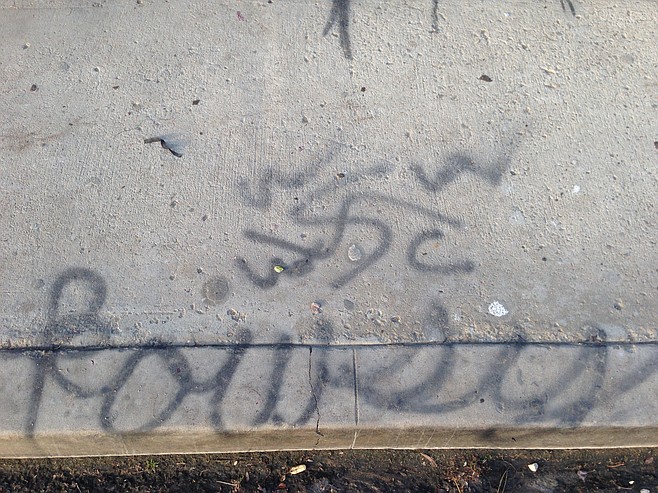 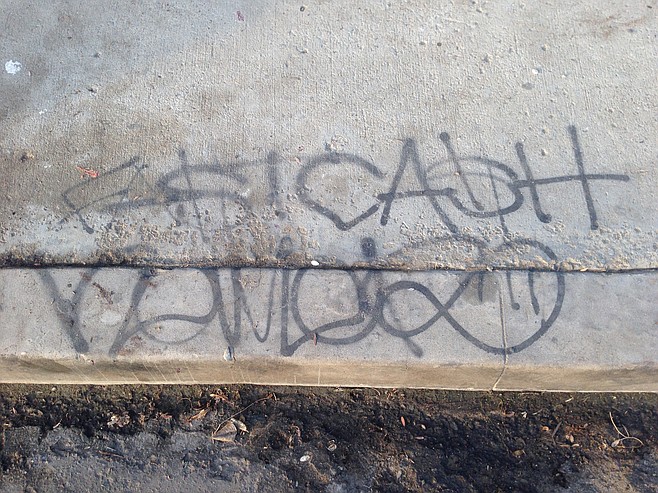 Around the same time, a spate of graffiti appeared on the sidewalk along the northeast corner of Ladera at Sunset Cliffs Boulevard. The tagging included several monikers spray-painted in black by several different hands, including (as best can be determined) “FA$TCA$H,” “Korean TCFX,” and “Howler.” The taggers added a couple of swastikas, one labeled with number 8s and the letters W and C. The graphics were artlessly drawn, so it wasn't immediately clear whether the vandals claim any Nazi affiliation.

The San Diego Police Department's gangs division does maintain a database of known taggers, but three calls placed to SDPD's Graffiti Strike Force were not returned.

An SDPD rep did confirm that police have found no clear association between this round of tagging and the carjacking.

Other tags extend deeper into the hillside portion of Sunset Cliffs Park, which features a number of hiking trails connecting sections of eroding sandstone cliffs. Surfers, hikers, and dog owners access this section of the park daily. This scrub and dirt-filled portion of the park is also popular among BMX bikers, mountain-boarders, and off-road RC enthusiasts.

However, it's what happens following the park's sunsets that has become a concern. Last year, dawn-patrol surfers discovered an all-night dance party and graffiti at one of the low-tide beaches located at the base of the cliffs.

The teenager attacked in early February is said to have been meeting friends in the Sunset Cliffs parking lot after dark when he was approached by the mob who beat him.

The parking lot is routinely patrolled by city park rangers and cops on the beat, dependent upon available manpower and potentially limited as resources are diverted to incidents at other locations. Given the number of revelers frequenting O.B. bars on a Friday or Saturday night, official presence is presumably thin during these hours.