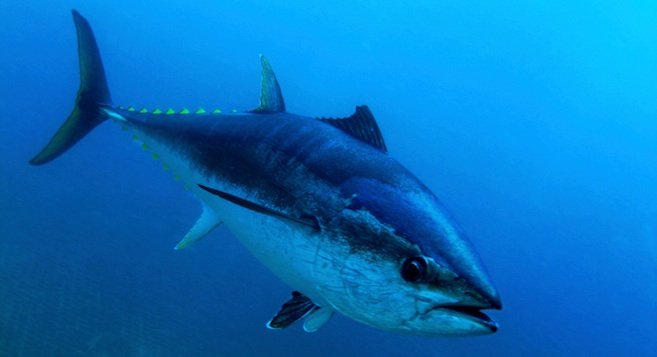 Bluefin on the scene

½ Day - ¾ Day: The ½ day boats are picking away at the rockfish, sculpin, sheephead, lingcod and calico bass, with the occasional yellowtail in the mix. ¾ day runs are concentrating on the good yellowtail bite at the Coronado Islands, while halibut are starting to show in the counts off the sandy areas, both near the Islands and just off the coast.

1 Day to 2.5 Day: Bluefin tuna have hit the scene again, this time within 25 miles of San Diego off the 182 bank. Catalina and Clemente Islands are churning out quite a few 30-pound range yellowtail. Down the coast, yellowtail are showing well nearshore north of Punta Banda, yet lingcod and rockfish are the main catch south of Ensenada as the yellowtail bite has been slowed by cooler water inshore down to San Quintin.

Freshwater: All the lakes in San Diego County are doing well this spring. With lower reservoir levels, the fishing has been more concentrated and water temps are up a bit from normal. Largemouth bass, redear sunfish, channel catfish and big blues are all active. There are many trophy trout over 8 pounds coming out of Lake Cuyamaca as this year’s stocks seem to have been a larger average.

Baja Sur: With the windy season upon the La Paz/ East Cape area, it’s the usual hit and miss game. The fish are there, but which days you can get there is the question. When it’s laid down enough, Isla Espirito Santos is experiencing a good yellowtail bite, especially where sardines are found. The pargo are on the chew near Punta Perico and some quality roosterfish have been caught of the sandy points. A few yellowfin tuna, wahoo and marlin have also been caught, though a little out of season for them.

Whale Report: The Eastern gray whale we see migrating off the San Diego coast is not endangered. Their population is at an estimated 18,000 animals. Although, a few of them aren’t Eastern grays. Recently, a tagged female Western North Pacific gray whale from Russia crossed the Pacific, swam to Mexico and back in the longest migration ever recorded for a mammal; a total round trip of 22,511 kilometers. The whales were so rare that scientists thought they had gone extinct until a small population was discovered off the coast of Sakhalin Island in Russia in the 1970s.

Trout Plants: 04/29/15 Poway (1500) Other than Lake Cuyamaca, this is the last trout stock scheduled in San Diego County until fall.

66 anglers aboard 2 boats out of Fisherman's Landing sacked up 2 Sand Bass, 27 Sculpin and 167 Rockfish.