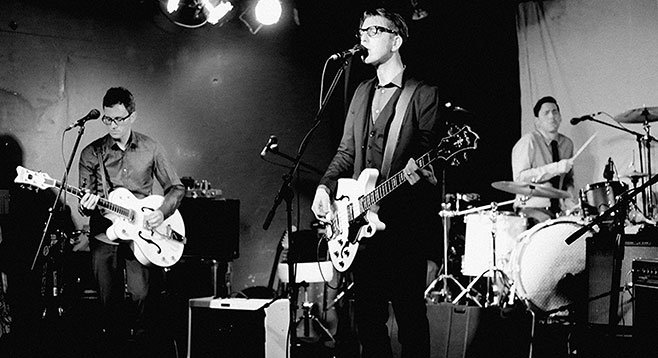 Between vice and virtue

Back from a lengthy hiatus from the local music scene is Grant Reinero with a new band, a goth-pop trio he calls Stewardess. Reinero seems intent on making up for lost time: “Stewardess has played the Tin Can, the Ken Club, the Griffin, Bar Pink, and the Hotel Utah in San Francisco.” Stewardess is Reinero on bass and vocals, percussionist Matt Fowler, and John Mattos on guitar and keyboards. They’ll be at the Hideout on Thursday, June 12.

Reinero: “I played in tons of bands. The most prolific was Spanakorzo. I’m the only member of Stewardess who played in Spanakorzo, by the way. We used to play the Ché Café, the Velvet, and the Casbah all the time. We released a few records and toured the U.S. and Europe. Myself, Ian Woodward from the San Diego band Arms Away, and Brian Cook ran a record label named Wrenched that release most of our stuff.”

Did Wrenched handle any other local bands?

Reinero: “Yes — Boilermaker and Short Wave Channel. We signed a press-and-distribute deal with Cargo Records that might have contributed to our success and ultimate demise.”

Reinero: “When I was a kid I was forced to go to church. I remember swearing that when I grew up, I would never do anything I didn’t want to. This childish declaration evolved into a bad habit of walking away when something got complicated. I still fight the urge to just take off. It’s no way to live.”

When that ended, you disappeared from the music scene. Was it hard to fade out, put all of your energy into a day job?

Reinero: “No. I was completely consumed by the ad-agency world for a long time. I fell in love with the romantic aspect of the job. It can suck your life away, though, if you let it.”

What was the tipping point that got you to say okay to starting a new band?

Reinero: “I had told myself that I was done with music. Then, about two years ago I picked up my guitar and wrote a song that was different than anything I had ever done before. It was spare, catchy, and it moved. Over the following weeks, new songs kept coming. When I played them for Matt and John, they were very supportive. Since then, those guys have taken those early sketches and fleshed them out into the best stuff I have ever been a part of.”

You’re okay with that?

Reinero: “Yes. Unlike myself, Matt and John are skilled musicians. They worked magic with very little.”

Have there been any challenges in returning to band life that were unexpected?

Reinero: “I didn’t anticipate that I would enjoy spending so much time in dive bars. I have come to accept that they are my natural habitat. This has its own set of challenges.”

And what would those challenges be?

Reinero: “I have a bit part in the battle scene between vice and virtue.”

During the time away from bands, did you at least play your instrument and keep your chops?

Reinero: “Sure, but the biggest improvement in my musicianship has not come from playing. Learning to listen made the critical difference for me.”

I’m wondering how goth-pop is being received here in sunny So-Cal...

Reinero: “Oceans and deserts are ideal backdrops for melodrama. I feel like San Diego has an element of dark romanticism in its nature. Like us, most are not overt about it. It’s just part of the mix.”

So, people are digging it?

Reinero: “As far as our reception goes, each show has been better than the last. We are really fortunate to have such a great group of friends here in SD. They are the reason our shows have been so much fun and why I look forward to playing out. It’s most gratifying to see people I don’t know get into the shows, particularly when they don’t fit the scenester stereotype. We played a show recently where a military crew danced up front in flip-flops. I couldn’t help loving it.”

What are your hopes for Stewardess?

Reinero: “We are hyper-focused on recording our album. We are swinging for the fences. We want to fully realize our vision and potential. Honestly, I spend every spare moment in pursuit of this goal.”

When I hear words like “vision” and “potential” used in the same sentence, I smell a tour. Yes?

Reinero: “When we do travel, it can’t be in the conventional sense. Don’t get me wrong — I value slumming it as much as the next guy. But Stewardess requires outrageous luxury in order to be able to faithfully reproduce our sound.”