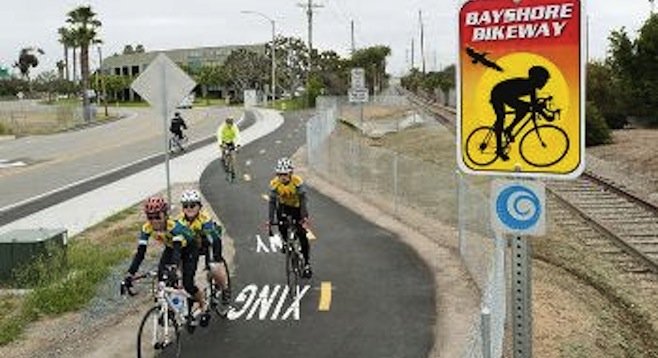 Local cycling advocates are celebrating San Diego's inclusion on a USA Today list of the country's ten most bicycle-friendly cities.

"San Diego is making great strides and we’ve got even more on the way to be excited about,” said San Diego County Bicycle Coalition executive director Andy Hanshaw in a July 2 release announcing the region's inclusion on the list, which does not give specific rankings.

Included in the reasoning for the selection of San Diego are the announcement of a local bike-sharing program and impending completion of the Bayshore Bikeway, which will provide an uninterrupted, dedicated loop to cycle around the San Diego Bay.

Other local perks for cyclists include the somewhat controversial CicloSDias events that temporarily close main thoroughfares to vehicle traffic and a $200 million San Diego Association of Governments-implemented regional bike plan, though portions of that program's funding have drawn criticism as well.

There are a lot of necessary improvements that could make SD more bike friendly, especially regarding pot-holes, but I do feel some kudos are deserved for the nice job done on the Cabrillo Bridge in Balboa Park. That little bridge used to be a nightmare, with major holes and breaks in the road every twenty feet. Now, it is a nice smooth glide. Bravo to the crew that did that one. Only about 1,000 more miles to go, guys.

So where is Decobike? Decobike founders (or representatives or marketers or president - they have designated their roles using various terms over the past few years) Colby Reese, Ricardo Pierdant, and others seem to have disappeared from the news, and there is no website update on Decobike San Diego. NP BID's Angela Landsberg has been hired as their marketer here, but ... no news lately. Other than DB's mandate that La Jolla had to choose locations for the stations by July 1, even though LJ doesn't want them in LJ, nothing new has been reported.

All of the original plans started with Jerry Sanders/Faulconer succumbing to the overtures from the Miami company/Miami Chamber of Commerce boys, granting a contractual agreement to Pierdant/Reese.

I think the Miami boys are having money problems.

The only place that their bike rentals make sense is Spanish Landing. Why not start out there, see how it goes, and leave the big installations (with advertising on bikes and kiosks ,and only single speed bikes) out of the hilly neighborhoods?