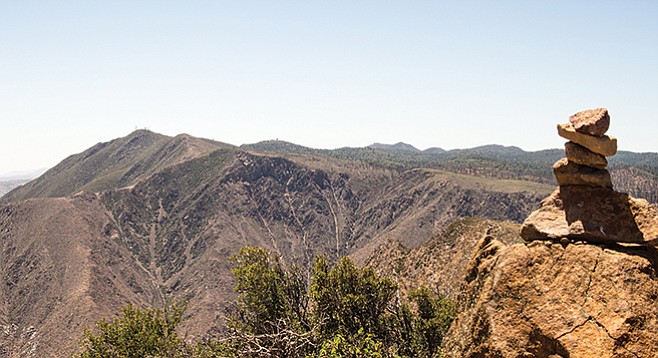 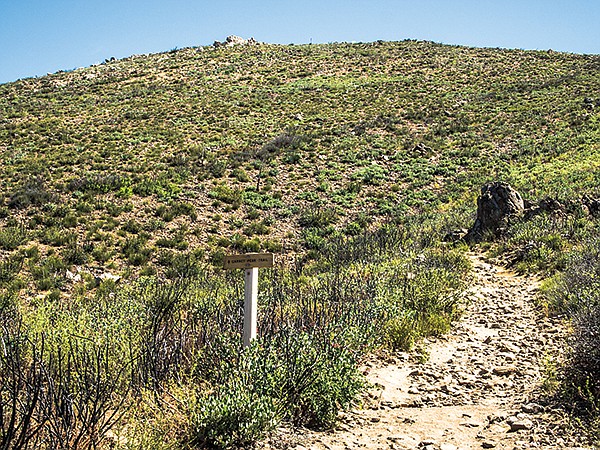 A wildfire swept over Garnet Peak not long ago, but it did not destroy some of the grandest views of any peak in San Diego County. From the top, views extend east to the Salton Sea, south into Mexico, west to the Pacific Ocean, and north to mounts San Jacinto and San Gorgonio.

Many of the blackened shrub branches show numerous vigorous green shoots sprouting from their base. These stump-sprouters include Eastwood manzanita, mountain mahogany, chamise, and cup leaf ceanothus. Additionally, some chaparral species produce abundant seeds that remain dormant in the soil until after a fire. Chemicals released by fire stimulate these seeds to sprout and begin growth. Frequently, the greatest profusion of wildflowers can be found the first few years after a fire. Even in this drought year, at least 50 different wildflowers either have already bloomed here or are now in bloom. In addition to the rarely found species mentioned above, a July visitor would have found Indian tobacco, goldenrod, bush lupine, white yarrow, monardella, slender sunflower, and prickly poppy, as well as many others. 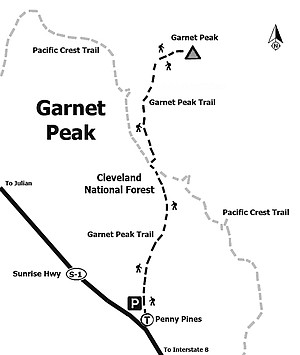 Cross the Pacific Crest Trail at 0.65 miles and follow the Garnet Peak Trail as it continues its northern direction up the slope of Garnet Peak. Note the bright red swellings on the leaves of many of the Eastwood manzanita plants lining the trail. A close inspection shows these to be wasp galls, present in an unusual abundance. In another 0.65 miles, you will be on the top of the Peak. Swallowtail butterflies and other insects may be seen hilltopping, thought to be a mate-location behavior, once the temperature warms up during the spring. After contemplating the views in all directions, return the way you came.

Note: Parking at the turnout is limited with alternative starting points to Garnet Peak at Penny Pines or just south of Penny Pines at a turnout. Bring a map of the Pacific Crest Trail in relationship to SR 1 and Garnet Peak. One option is a 5.8-mile walk to the peak from Pioneer Mail Picnic area and back.