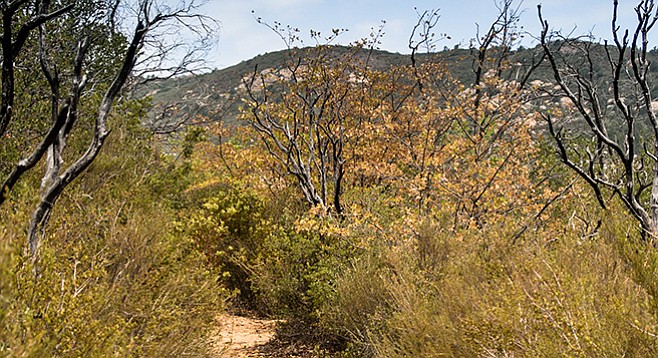 See how it grows on the once-scorched Pine Ridge Trail 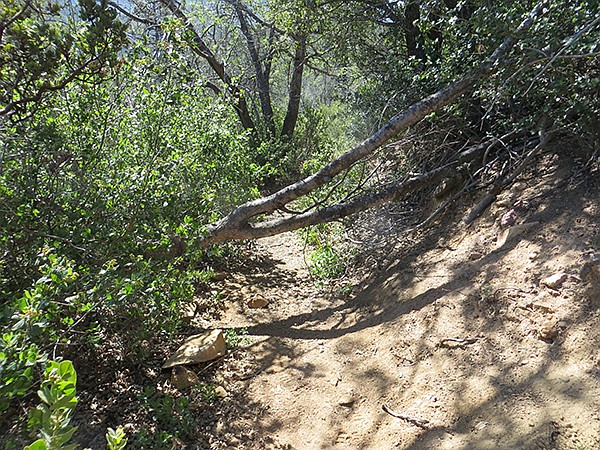 The Pine Ridge Trail has some delightful views of the Cuyamaca Mountains and the Sweetwater River watershed as it nearly reaches the crest of the ridge at an elevation of 4573 feet. There is much of interest year round in the near wilderness, where there can be an abundance of wildflowers, depending on amount of rainfall and the season. The Green Valley Campground is a central location for a number of hikes if there is an opportunity for an extended visit with campsites set in among mature live oaks, Jeffrey and Coulter pines and, if water is flowing in the Sweetwater River, there is added interest, especially at the falls (see column on Green Valley Falls Loop, July 31, 2013). 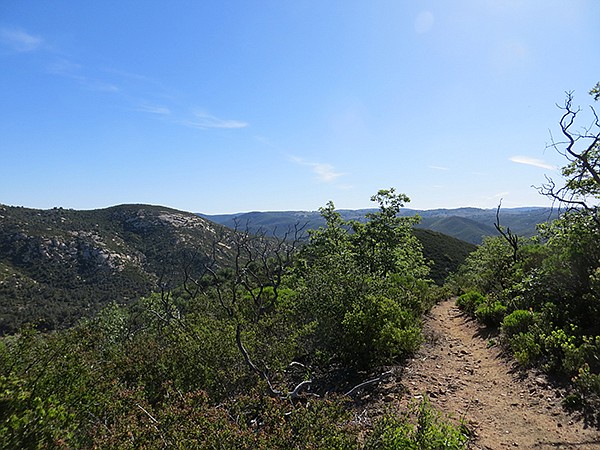 To extend the hike mileage approximately another 3 miles and close to 500 feet elevation, park your vehicle in the large parking lot on the east side of SR-79N, where there are three entrances to the lot just before the bridge that crosses Sweetwater River. If starting from this location, carefully cross to the west side of SR-79, where, just north of the bridge, it is a very short distance to the West Side Trail. Turn south and continue past the Monument Trail (see Airplane Monument column, October 23, 2013) until passing the Arroyo Seco Picnic area amphitheater to the fire road.

Begin the 3.3-mile loop Pine Ridge loop just north of the Arroyo Seco Picnic parking area near the kiosk by the restrooms. Walk north on the Arroyo Seco Fire road for 0.8 mile, then west on South Boundary Fire Road (also signed as a California Riding and Hiking Trail) for 0.1 mile before turning south on Pine Ridge Trail for 2.1 miles until it ends between campsites 37 and 38. 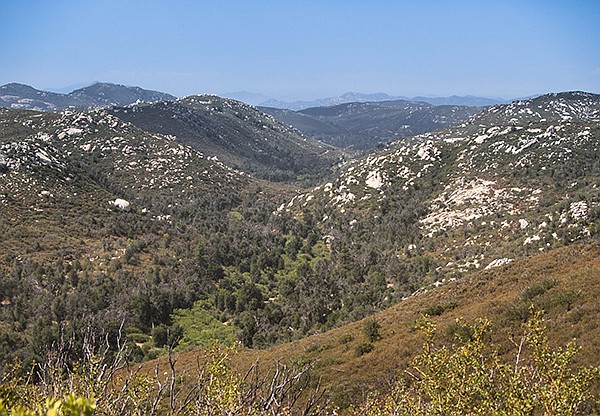 Despite the name of the trail, there is no evidence that Coulter pines or any other pine lived on the ridge, now or before the wildfire. In fact, the first Coulter pine seedlings do not make an appearance until the trail begins to climb on the slope. At this point, black oaks as well as an occasional patch of more mature pines that were not killed by the fire become visible. Be sure to pause for the views of the back trail, valleys, and peaks that include Japacha and Cuyamaca Peaks to the north. 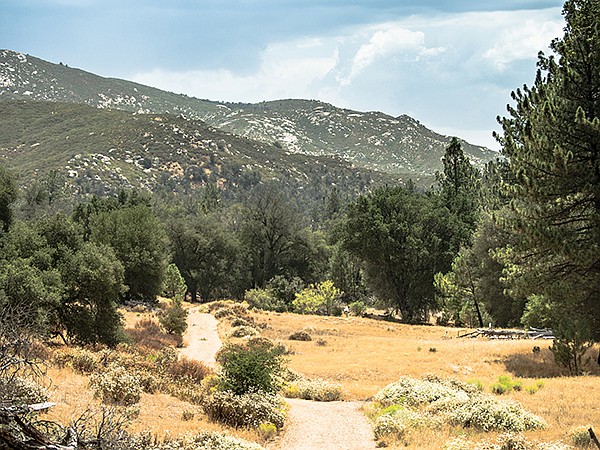 The area is still recovering from wildfire, so the blackened stems of fire-killed shrubs are apparent, but there is almost complete coverage of the soil with new, living, burl-sprouted and seedling Eastwood’s manzanita, Palmer lilac, chamise, scrub oak, sugar bush, and bush rue. 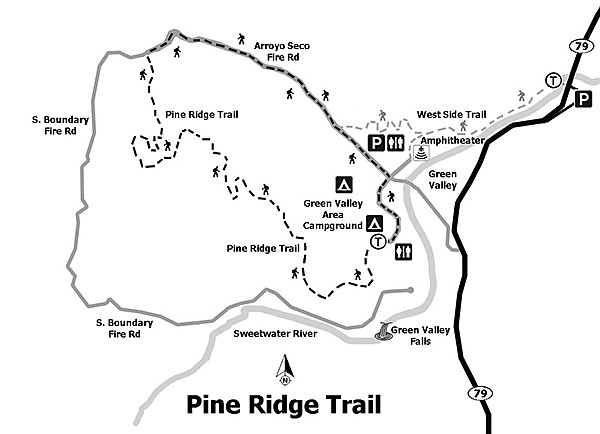 Other typical montane chaparral plants to look for while following the trail are the numerous wildflowers that may be in bloom, depending on the season and recent rainfall. These include Nuttall’s snapdragon, slender buckwheat, Parry’s phacelia, California everlasting, Parish’s goldenbush, scarlet bugler, the Humboldt lily, mariposa lily, and chaparral bush mallow.

Follow the paved campground road to the east then north once leaving the Pine Ridge trailhead between campsites 37 and 38. Continue on the road back to the Arroyo Seco Picnic parking area to complete the loop. If parked at the Sweetwater Bridge lot, return via the West Side Trail, turning right north of the bridge.

Distance from downtown San Diego: 47 miles. Allow 60 minutes driving time (Green Valley Campground or Sweetwater Bridge parking lot). From I-8, exit on SR-79/Japatul Valley Rd., turn north on SR-79, and drive 7 miles, turning west into the campground and following the signs to the Arroyo Seco picnic area (day-use fee) or continuing another 0.6 mile to the Sweetwater Bridge lot and park (no day-use fee).

Difficulty: Easy/moderate with 500 feet of elevation gain/loss over well-maintained trails and dirt fire roads. Parking at Sweetwater bridge adds up to 500 feet of elevation gain. Facilities at both locations with water only in the campground. No dogs, mountain bikes, or horses are allowed on the trail. However, horses and mountain bikes are allowed on the Arroyo Seco Fire Road, which is used on the return leg of this hike.