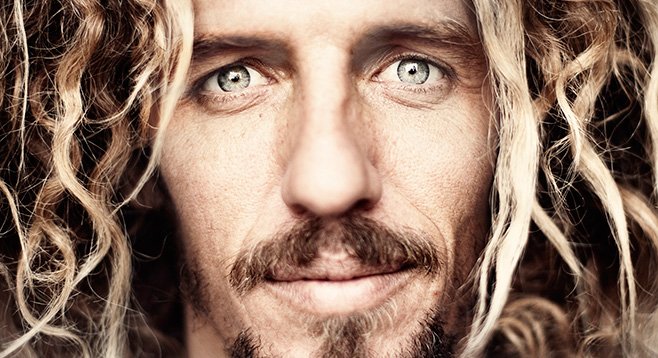 You can thank Rob Machado for those new environmentally friendly trash cans along Seaside Beach in Cardiff. Surely, one person already has: the state parks employee responsible for cleaning up the daily mess caused by the old ones. “They were these metal trash cans with no lids, all rusted, and some of them didn’t even have bottoms,” Machado tells the Reader by phone from his Encinitas home. “Every weekend, they would overflow. And then the seagulls would come in and dig all this trash out looking for pieces of sandwich or burrito or whatever, and the trash would just blow everywhere.”

Since 1996, Rob Machado has been among the most visible of pro surfers. His dozen World Championship Tour victories scored him consistently among the top ten for years. Inducted into the Surfers Hall of Fame in 2000, Machado also has a star on the Surfing Walk of Fame in Huntington Beach. In 2004, he started the Rob Machado Foundation to help underwrite various environmental programs. He describes his focus on beach trash with two words: “Kinda ongoing.”

While still in high school in North County, Machado joined the Surfrider Foundation. “One of the first surf classes was involved in beach cleanup and water-testing. Then, back in 1990, I went back to Cardiff Elementary, where I went to school, and they had these 50-gallon drums for trash cans. No recycling. I was just blown away. So we started a recycling program there, and the trash went from eight down to two of those 50-gallon drums a day. The rest was recycled.”

Machado says that getting a recycling program started in a public school was far easier than installing new trash cans at a state-run beach. “Cities are easy. This time, we were dealing with the state, and it’s twice as hard at that level. But the squeaky wheel gets the grease, and we just kept bugging them.”

Part of the funding needed to design and manufacture the new trash bins came from last year’s RMF benefit concert. On Monday, November 11, the Belly Up will host the second such benefit show with Jason Mraz, Goo Goo Dolls’ front man John Rzeznik, and Run River North. Machado played rhythm guitar in his own band for a while, too, but says he’s not doing that anymore, partly due to the time commitment to his foundation.

“You can’t just be content with the status quo. When you see things that are horribly wrong, you gotta do something.” But, he admits that there is a dark side to beach cleanup. “I kinda feel bad for the seagulls.” He laughs. “They’ll have to find food somewhere else.”