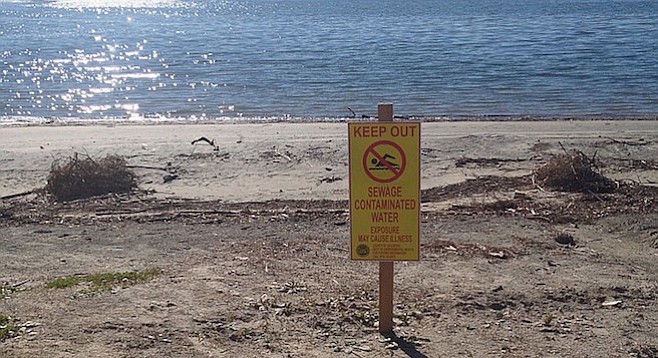 Get your butt off the beach

The trash tally for San Diego beaches was released on January 12 by San Diego Coastkeeper and the San Diego chapter of the Surfrider Foundation.

In beach cleanups hosted by both groups, 197,788 pieces of trash were removed from the coastline in 2015. For two years running, Fiesta Island won the prize for the most trash collected by weight. Second place went to the Moonlight Beach in Encinitas, followed closely by Sunset Cliffs in Ocean Beach and the Oceanside Pier.

Kristin Kuhn of San Diego Coastkeeper said on January 20, "We found 9825 pounds this year and 11,428 last year. We are wary of putting too much weight on that number, though, since poundage doesn’t necessarily correlate to dirtiness. One discarded I-beam weighs a lot more than 1000 cigarette butts, but the butts are likely doing more damage to the environment."

For the second year in a row, cigarettes (79,083 pieces) were the most frequently discarded trash, with plastic wrappers (17,342 pieces) and plastic foam (13,970 pieces) taking second and third place.

"Most of what we found — 82 percent, if you include cigarette butts — were plastic-based items. The rest were things like aluminum cans, glass, paper, and cloth."

While recyclable items were found, Kuhn said, "Just because we find something made out of a recyclable material doesn't mean it can be recycled. It can be very dirty, filled with sand, or broken into fragments, so it can be hard to get a clear count on what’s recyclable.”

The majority of items collected were small, but large items had a significant impact on the total weight. "Large items included things like crates, blankets, tarps, discarded boogie boards, and pipes," said Kuhn, "and the smallest items were micro-fragments of plastics such as foam pellets, plastic nurdles, itty-bitty shards of balloon ribbon which get brittle and fracture into thousands of pieces."

As far as the most unique items collected in 2015, Kuhn remarked, "We found a good number of foreign passports, drug paraphernalia, glow sticks, and a whole lot of condoms and tampons."

Kuhn points to inland littering as a culprit. "It’s hard to tell an exact percentage because once the trash is on the beach there’s no way to tell its exact origin, but we know that trash moves through our stormwater system and ends up on our beaches. It would likely take a comprehensive debris mobility study with item tagging and tracking to get specifics."

El Niño weather conditions will likely push trash caught in urban canyons and riverbeds downstream and into the ocean. "But if that trash wasn’t there in the first place, the rain wouldn’t have trash to carry," points out Kuhn, "so the problem is with the litter accumulation, not the rain."

When asked how trash is collected once it reaches the ocean, Kuhn said, "Often, it’s not. That’s a big part of why we do beach cleanups. Our beach-cleanup volunteers are our last line of defense before that litter turns into marine debris. Once trash is in the ocean, it is much harder to find and extract. Scuba cleanups are one way to get trash out of the ocean, as are kayak and paddleboard cleanups, like those conducted by our friends at H2O Trash Patrol."

Besides beach cleanups, Kuhn explained, "Some municipalities are proposing more street sweeping as part of their water-quality improvement plans. There is also a new statewide trash policy that should come into effect locally sometime in the next few years, possibly 2018, during the stormwater permit renew. Under this new rule, stormwater permit holders, generally municipalities, cannot discharge trash into waterways. They will either need to put up screens or take equivalent action to prevent or remove trash from our waterways."

The next beach cleanup hosted by the San Diego Coastkeeper is on January 30 at Sunset Cliffs.