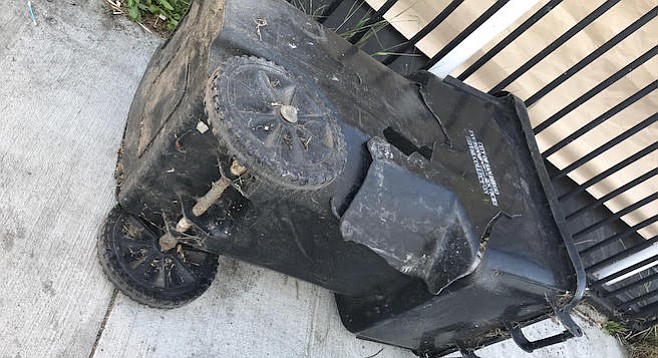 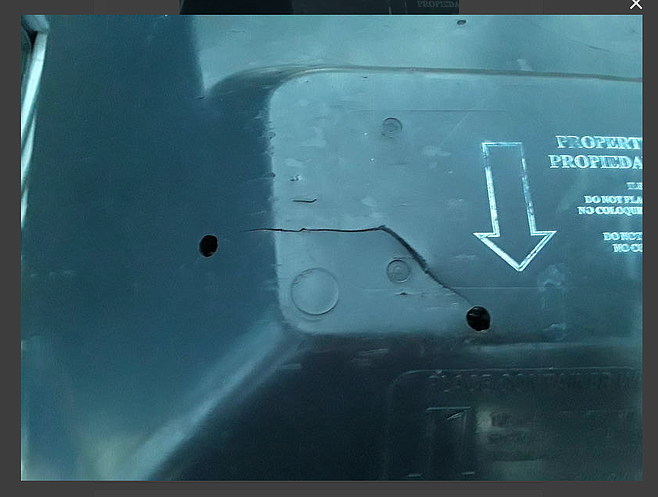 David, a retired engineer, drills holes in his bins to stop cracks from worsening.

“I think the city and its employees are at fault for the cracking and breaking [of the black trash bins],” says Damien Abrams. “They should have some kind of insurance policy or warranty with the manufacturer to replace them.”

Trash cans cost up to $95 apiece ($70, plus $25 delivery), so, many residents are repairing their damaged bins.

Abrams, a 39-year-old auto-customizer from Paradise Hills, says, “I see the trash-collecting trucks [and their drivers] slam the bins and constantly drop them when returning them to the curb, and that’s why most of them are broken. When I come home from work, my trash bin is almost always on its side or back side and residents are being fined for stuff their own city workers are doing, and it’s not right.”

He recently saw a photo of David’s somewhat-normal-looking trash bin. “I’ve seen people drill multiple holes along the crack and use zip-ties crossing over in an X pattern, kinda like a stitch to hold them together.” 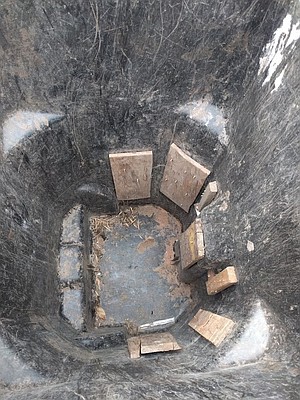 Screws and scrap wood hold together this cracked bin.

David, a Kensington resident in his 60s, didn’t have zip-ties in his 3/8″ drilled holes at each end of a crack. An engineer by trade, he said, “[The holes] will stop the crack from spreading, and drilling at the ends of the crack spreads that stress out.”

He is content with his trash collectors because his first bin lasted ten years and his second one is going on its seventh year — thanks to his “stop drilling” process.

David said someone in his neighborhood got creative with their recycle bin, painting it black because the city provides one additional blue recycling bin for free (if the applicant and his or her address is approved).

Last year, John S. from south San Diego tried to fix the middle section of his bin with duct tape and epoxy.

“We had a problem with our trash [bin] because the claws were too powerful,” he says. “We sent photo proof to [the Environmental Services Department of the City of San Diego] and they said they will not give us a free trash can.”

Instead of driving about 25 miles north to the city office at 8353 Miramar Place for a replacement, John went to the Home Depot off Palm Avenue.

“I got some of their plastic wrapping [stretch film wrap] and black spray-paint and came back home to fix my trash can,” he said.

He wrapped the bin tightly with the wrap and then spray-painted it. “The paint didn’t stick,” he said, “so that was a waste of money.”

The following Thursday, the truck driver picked up John’s bin and when the claw mechanism put it down, the fracture line spread even more, “almost breaking it in half.”

The next week, John tried his quick-fix again (without the paint) but the weight of the trash made the bin “look all lopsided.” At 6 a.m. he was up and heard the trash truck. He said he ran outside in his pajamas to watch how the driver would handle his bin. “[The trash collector] drove right past our driveway and trash bin, and he laughed at me.”

Later that morning, John called the 858-694-7000 Environmental Services phone number and spoke to the operator. “She responded with a ‘sorry’ and said that they would come the next day to pick up the trash,” he said.

“They picked it up, but my trash can freakin’ fell apart afterwards,” he said. “Anyways, I ended up coughing up the $90 or so after all that.”

John thinks he could’ve gotten a credit toward a new bin, but he didn't know how old his old one was. The city website states “Containers within the 10 year lifespan will cost a prorated fee based on $7 per year, plus delivery charge, if applicable.”

And if John’s lid was the only thing broken, he could’ve gone to their office and picked up a new lid for free of charge, as long as he had the container serial number and address that corresponds to the bin.

I have to believe that if someone took the city to small claims court, grand jury report in hand and pictures and video of a trash bin being thrown, they could make the city pay for the bin. It would make a lovely class action suit as well. The grand jury report has pictures of smashage and cracked lids that look exactly like ours - and everyone else's.

Plastic trash cans have a useful life span and need to be replaced. The city requires that each resident have a specified number of trash cans. The city provides the trash can, picks up the trash, therefore they are responsible for their care and handling. I have used these type of trash cans for years and have not been able to damage them short of running over them. I think that residents should stand up and file multiple suits against the city. Like you I'll bet they win.

Well, thanks a heck of a lot! They must have fired some of those can-abusive drivers and then Edco hired them in La Mesa. Our driver who ran the route for more than 15 years retired, and since his retirement, we have had the kind of damage to cans on my street that you are talking about.

It's a city scam. We pay our taxes. These bins belong to the city. They say right on them property of the city. But when the trash trucks CRUSH them, and they do, WE have to pay to replace them.

If the cans belong to the city, then the city should replace them. Especially since it is the city's trash truck drivers that are crushing them.

The grand jury said the city should replace the cans. The city refuses. I say we need to replace all of our city administration. Vote them all out, from the "strong mayor" on down.