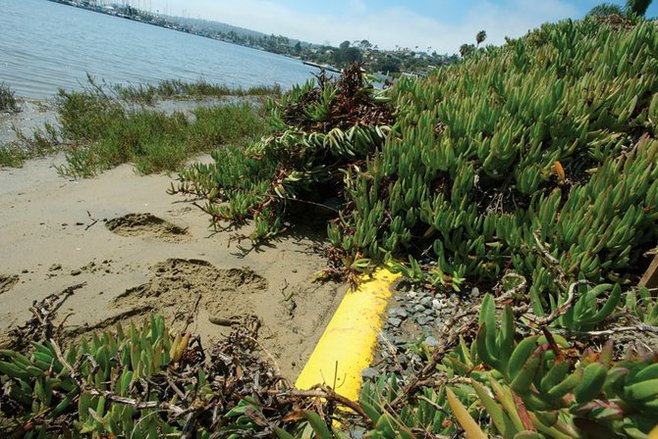 Some residents refer to it as the Sleeping Giant. An eight-inch-diameter Navy pipeline, carrying diesel and jet fuel from Point Loma to Miramar, lies beneath San Diego streets and canyons. Each year, 323 million gallons of fuel are pumped through the pipe at 800 pounds of pressure per square inch. The pipeline is 57 years old. 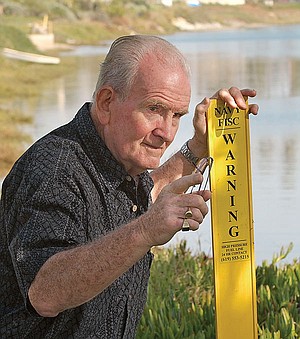 Jim Gilhooly, a 26-year resident of Point Loma, has 40 years of experience in the pipeline industry, including work on the Alaska pipeline. As Gilhooly tells it, the Navy’s pipe should have been replaced 20 years ago.

“Corrosion in buried pipelines, whether they be oil, gas, or water, is a fact of life,” he says. “Average life of pipelines without life-extension programs is 20 to 30 years.”

Gilhooly’s Point Loma home perches above San Diego Bay, overlooking Defense Fuel Support Point, Point Loma, the largest naval fuel farm in the world. Gilhooly says the pipeline’s ¼-inch walls have worn thin from corrosion, and because the fuel is pumped in intervals, the line is susceptible to corrosion from condensation. He warns of the consequences if the pipe were to rupture. He cites the ExxonMobil pipeline that ruptured last July in Montana.

“Some people think that a leak would be like a dribble coming from a faucet, but when you’re working with 800 [pounds per square inch of pressure], when that gets a leak, that will shoot half of a mile, like a shot out of a gun,” he says. “Depending on when they catch that break, if they are using pumps that are 2000 gallons per minute, then the spill would be substantial. Not only does the fuel have a high flash point, but you also have the fuel vapor and the environmental impacts.

“But they don’t want to answer that. They are leaving the community out of it, and that’s a cardinal sin.”

From the fuel farm, the 17-mile pipeline extends along Rosecrans Street, turns north to cross the San Diego River near Interstate 8, crosses the Rose Canyon Fault near Tecolote Road, and runs under the Tecolote Canyon Golf Course before heading for the intersection of Balboa and Mount Abernathy avenues. After crossing the 805, it travels north to Marine Corps Air Station Miramar.

The Navy has stored fuel on Point Loma since 1901, when Elihu Root, then secretary of war, set aside 360 acres of the Fort Rosecrans Army Reservation to the Department of the Navy to use as a coaling station. In 1932, storage tanks were placed on-site. By 1954, the pipeline connected the fuel farm to the Miramar air station. Today, 54 above- and below-ground tanks hold 100 million barrels of fuel.

In 2006, the Navy informed the public that approximately 1.5 million gallons of fuel had leaked from the aging tanks. Three years later, construction began to replace most of the tanks. However, Project 401, the largest construction project in the history of the Department of Defense, which the Navy claims will cost $139 million, says nothing about replacing the pipeline.

“You put $200 million to replace this fuel facility, but you’re piecemealing this damn pipeline?” says Gilhooly. “It doesn’t make sense.”

In August, the Peninsula Community Planning Board issued a letter warning of the consequences if the aged pipeline ruptured. The letter was addressed to naval commanders, Mayor Jerry Sanders, Councilmember Kevin Faulconer, and senators Dianne Feinstein and Barbara Boxer.

“The best time to address high-risk petrochemical toxic spills is before they happen, before the environment is endangered,” reads the letter.

Gilhooly, who helped draft the letter, believes only small segments of the pipeline have been replaced. He has asked the Navy for maintenance records and for the design codes used to build the pipeline. He has requested reliability reports on pipeline segments. His requests have been ignored.

“There are a number of concerns, including seismic,” says Gilhooly. “The seismic regulations in 1954 were next to nothing compared to those today.”

The pipeline crosses what according to county documents is probably “the most significant potential earthquake source in the San Diego urban area,” capable of a magnitude 6.75 to 7 earthquake.

But the Navy says the pipeline should last another 29 years.

“An optimization study was completed this May,” writes Nannette Davis from the Navy’s communications support firm. “The study concluded that the life cycle of the pipeline would be extended for another 29 years, with all routine inspections, maintenance and repairs to continue as planned.”

In another email, a naval spokesperson said strict regulations are in place for the pipeline. “The Miramar pipeline is a Category I pipeline and is subject to an ultrasonic inspection every 5 years.”

Ultrasonic inspections are conducted with tools called smart pigs. The pigs, worth $4 to $5 million each, detect anomalies from inside the pipe. The last smart-pig inspection was in 2008 and cost more than $8 million, including repairs.

In addition, a Navy employee inspects the pipe five days a week. When the pipe is transmitting fuel, an employee walks along La Playa beach every hour to check for leaks.

Gilhooly says he hasn’t seen naval employees checking the pipeline. And as for the smart pigs, Gilhooly laughs.

“That pig thing is a joke,” says Gilhooly. “The tools are good tools, but the pipeline was already worn when they calibrated the thing. They didn’t run the pig until the pipe was more than 40 years old.”

Adding to that, Gilhooly says that most private companies are required to send pigs down the pipeline once a year, not every five years.

Bill Bush, spokesperson for the American Petroleum Institute, confirms that the Navy has different standards. “If this is owned by the federal government,” he says, “then they are in a different category for pipelines, and they are exempt from state and some federal regulations.”

Despite assurances on the pipeline’s condition, according to Councilmember Faulconer’s office a plan is in the works to replace the line.

Asked when the pipeline will be replaced, the Navy’s spokesperson responded, “To be determined.”

Great article. How do we get the replacement project moving forward? We could use the stimulus money and help people that are out of work.

The Navy has installed a state of the art new Fuel Storage Facility and are preparing a new Fuel Pier to be installed after demolition of 1950s old pier, yet they intend to apply a BAND AID FIX and CHERRY PICK areas of the subject pipeline to repair. This vintage Fuel Pipeline is the glue that holds the entire Fuel Facility together.

The Navy also proposes to relocate portions of the Vintage (60 yrs.) Fuel Pipeline along the Rosecrans traffic corridor in Point Loma, (the backbone of the Peninsula traffic flow) This does not make economic or operational sense; causing gridlock and catastrophic risks as well as possible structural failures to other Vintage Service Piping, substandard, deteriorating Roads, outdated traffic signals, signs designed decades ago for fewer vehicles, (cars, construction trucks, etc.) All against a background of constructing in earthquake country. Additionally, the following existing conditions on the Point Loma Peninsula only highlights that this is a bad idea!

The construction will restrict flow & merging of already congested business traffic, University/School & Church access, heavy Military use to & from State Highways, residential/public access to Lindbergh International Airport & Downtown San Diego. Restrict Emergency egress from all points off the Peninsula to Trauma Hospitals, since we are surrounded by water on three sides and do not have a Hospital on the Peninsula. (Navy does not have Emergency Plan in place for proposed Fuel Pipeline construction) Because of the above the Navy, The Mayor and City Council must realize that the risk of catastrophes, emergencies, are likely to be more critical and massive from the Peninsula Community than neighboring Communities because:

Every day drivers on Rosecrans corridor experience massive a.m. & p.m. gridlock backups on the following intersections: Nimitz, Canon, Talbot, Sports Arena, Midway, Barnet, with overflows to Service Roads, Catalina & Chatsworth. Not to mention the recent development of Condo's on Scott Street and the proposed construction of Condo's in the 1100 block of Rosecrans.

Think about the effect of a six month Pipeline Construction schedule on Rosecrans, the backbone of traffic. Total Gridlock.