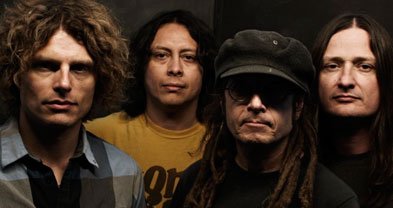 Drummer Mario Rubalcaba started listening to punk rock in the sixth grade, when a friend played him songs by Bad Brains, Black Flag, Discharge... His interest expanded to local acts such as Pitchfork, Heroin, and Battalion of Saints, members of which he has since joined onstage and in the studio.

Over the years, the co-owner of Thirsty Moon Records in Hillcrest has drummed with a handful of San Diego bands. Starting with post-punk group 411 in 1990, Rubalcaba went on to play with Thingy, Clickitat Ikatowi, Rocket From the Crypt, Hot Snakes, the Sultans, and alongside Matt Anderson and Scott Bartoloni from seminal screamo band Heroin in a 2002 regrouping of Battalion of Saints.

“It’s its own kind of funky mildew,” the former Team Alva skateboarder writes in a December 16 email about OFF! “No band that I have ever played in has had this type of vibe. It’s a really heavy thing...but you can still dance to it. It’s what we call ‘the dark party.’”

OFF! debuted in March at the South by Southwest music festival in Austin, Texas, and played their first Los Angeles show at a downtown warehouse with an art installation by Raymond Pettibon, the brother of Black Flag guitarist Greg Ginn. The group recorded four four-song EPs, which were recently released as a box set by Vice Records, First Four EPs (a nod to Black Flag’s First Four Years). Many of the tracks were originally put together by Morris and Coats for what would have been the first Circle Jerks album in 14 years. After the album fell through due to band disagreements, Morris recruited a new lineup to see the songs through.

“[Morris] told me about wanting to get back to basics and trying to capture a sense of urgency,” Rubalcaba writes. “Just getting something together really quick, bang it out with fury, record it without taking forever, and just put out a four-song seven-inch in the vibe of the Black Flag Nervous Breakdown EP. How could I resist?”

Earthless is currently touring Australia. OFF! plans to tour soon, with stops including SXSW and Coachella. Spider Fever infects Casbah January 30 with Archons and Widows.