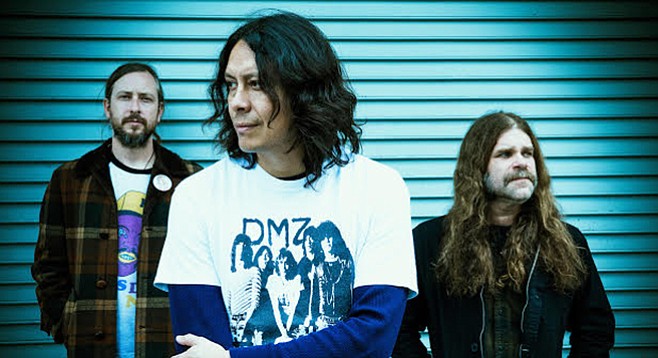 “Heaven is thought of as this beautiful paradise in the clouds, which may very well be true, but all I see is black,” says Earthless guitarist Isaiah Mitchell of the title to the band’s upcoming full-length, Black Heaven. “When you look up at the sky, you’re gazing upon heaven. But, outside of the celestial beings that light up the night, all is black.”

Earthless, "Gifted by the Wind"

Their first album in five years (due March 16), Black Heaven was recorded at Rancho de la Luna in Joshua Tree, with producer Dave Catching (Eagles of Death Metal). The first single, “Gifted by the Wind,” is one of four tracks on the album to include vocals by Mitchell, a departure from their previous concentration on long and trippy instrumentals.

“It’s an enjoyable and refreshing process, having to consider vocals being in the mix,” says Mitchell. “If we have the capability in integrating vocals, why not?”

Drummer Mario Rubalcaba points out, “We’ve done a few songs with vocals in the past for various splits and comps. Like Isaiah said, why not? It was kind of a fun challenge to make a record in a more traditional format.” Currently a trio, Earthless includes former Electric Nazarene bassist Mike Eginton. “On the older records, Mike was responsible for a lot of the riffs that would start these jams, but on this one, Isaiah really brought his own pizzazz.”

Inspired by Krautrock and Japanese psychedelic bands, Earthless was launched in 2001, while Mitchell (Nebula, Lady Dottie & the Diamonds) was teaching guitar lessons at Moonlight Music in Encinitas and Rubalcaba and Eginton co-owned Thirsty Moon Records. They scored a 2007 San Diego Music Award (Best Hard Rock Album), played SXSW in 2008, CMJ in 2010, and have gone on multiple tours of Australia, Europe, and Japan.

After the Casbah record-release parties March 2 and 3, the band was set to embark on a U.S. tour through March, followed by three weeks on the road in Europe, wrapping up April 19–21 at the Roadburn Festival in the Netherlands, where they recorded a 2008 live album.