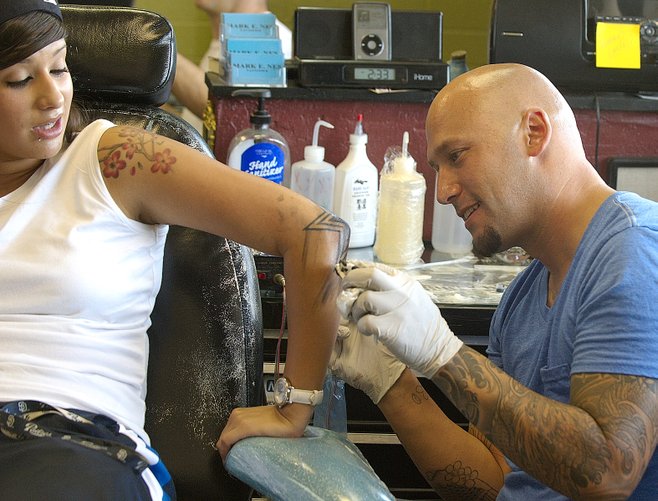 Say the name Lisa Fasulo in a San Diego tattoo shop and you may get blank stares from shop owners, employees, and hangers-around. Mention the Learning Channel’s one-hour reality-style television program about Fasulo’s tattoo school, however, and you’ll get an earful of seething comments and a list of reasons why Fasulo is the devil incarnate. The program, “Tattoo School,” premiered on July 14 and gives an overview of Fasulo’s two-week course, in which wannabe tattoo artists pay $4800 for lodging and 80 hours of tattoo instruction.

“The two-week thing is bullshit,” says Jack D’Amore, a 59-year-old tattoo artist who works out of Body Mark’s Tattoo on El Cajon Boulevard in North Park.

D’Amore has just completed inner-lip tattoos on two young musicians. Now he leans against a glass display case and explains that the traditional way of entering into the tattoo industry is through a two- or three-year apprenticeship. He recalls a woman he knows who used to take on apprentices for a full three years. 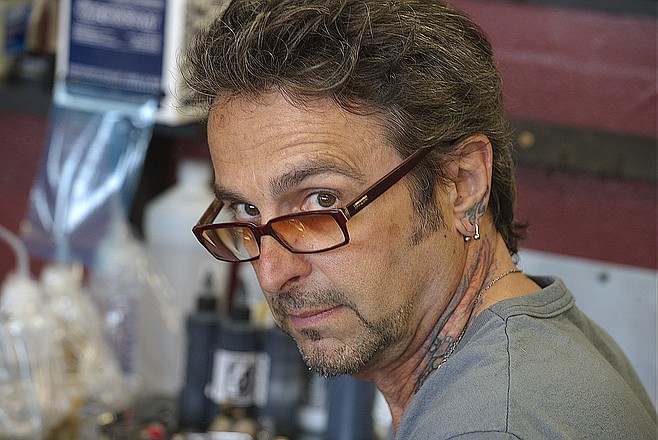 “The first year, you’d learn how to do all the technical stuff: building machines, making power boxes, and all that stuff,” he says. “And then the second year, you learned the customer service. Then in the last year, she’d teach you how to tattoo.”

Mark Nes, the 34-year-old owner of Body Mark’s, pipes up from his station by the window where he’s tattooing a client’s chest.

“I don’t know what procedures they teach them [in the two-week course], but the things we learned in two years seem kind of hard to condense into two weeks,” he says.

Then he goes on to explain that during an apprenticeship, a budding tattoo artist learns sterilization techniques, skin stretching, the differences between skin types, the basics of anatomy, “a lot of repetitious drawing,” and the rules specific to subject matter and tattoo styles.

“Tattooing isn’t just pick a design and do it. Nowadays there are more rules being broken, things that don’t follow the guidelines of good tattooing,” Nes says. “For example, take a cherry blossom tattoo. Cherry blossoms have five petals. There are a lot of guys who do them with four petals, which doesn’t make sense. It looks like a pink four-leaf clover. But we see them in tattoo magazines and on people who come in and have been tattooed other places. It just looks silly.”

Although neither Nes nor D’Amore has seen “Tattoo School” on television, they agree there’s no way a two-week program can provide the knowledge needed to become a tattoo artist. In addition, they fear the impact such a program could have on San Diego’s tattoo industry. It could flood the already overpopulated industry with new, inexperienced tattoo artists.

“[Fasulo] is somebody who’s got a great idea on how to make a buck. What scares me and a lot of shops is that it’ll take off,” D’Amore says. “It might sound a little like ‘Oh, woe is me,’ but it’s true. It could ruin the industry.”

In San Diego, “There are at least 130 to 140 shops,” Nes says. “Each shop probably has anywhere from three to eight artists. And the industry has probably grown 20 or 30 percent in the last five or six years. Between last year and this year, there are at least 15 new shops this year, maybe even 20. And compared to last year, it’s a lot slower this year [at Body Mark’s] than it was the year before and the year before that.”

To what does Nes attribute the rise in the number of people interested in becoming tattoo artists?

“TV,” he says. “There are so many shows glorifying the tattoo industry and tattooing.”

Prior to the airing of “Tattoo School” on July 14, Tattoo Artist Magazine, a trade journal, published an “Official Statement” on its blog shaming the Learning Channel for producing the show and asking for a boycott of the channel.

“Do not promote or give airtime to the lowliest and most unethical practitioners of our treasured craft and profession. The dangers to the general public cannot be overstated,” the statement read. “Every case of infectious disease transmitted, every victim who will need laser surgery after receiving a bad tattoo could potentially bring lawsuits against TLC, the producers of this show and the ‘stars’ who own and operate the unethical tattoo schools, as well as their students. (And we will encourage these actions in every appropriate case.)” 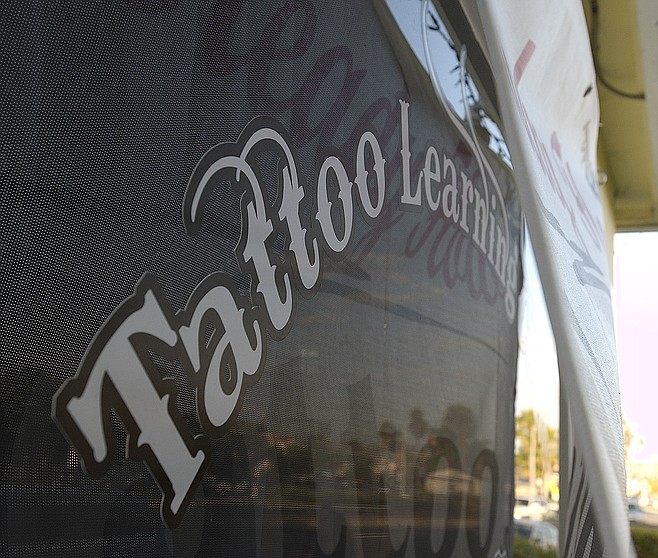 Storefront of the Tattoo Learning Center, its sign covered by a banner for Steady Flow Tattoo, at 1946 Grand Avenue.

Bloggers across the country took up the cause, creating Facebook petitions and organizing protests. One small protest took place here in Pacific Beach on Monday, July 11, outside Fasulo’s Tattoo Learning Center. (She also has a school in upstate New York.) Although the Tattoo Learning Center has been in San Diego since December 2008, Fasulo moved it from its City Heights location at the end of 2010. According to a July 12 NBC San Diego report, the protesters had not been aware of the school’s existence until hearing about the television program.

But, still, when she heard on Sunday, July 10, that a protest would take place in front of the San Diego school on Monday, she cancelled the two-week program that was set to begin that day. Her fear was compounded by the “threats and hate” she received in her email and voice mail as the television channel began promoting the program. San Diego was the first place where things got “physical.”

“They were touching our windows, moving our signs,” she says over the phone one day in early August. She’s supervising a group of students at her New York school but has taken a few minutes to share her thoughts. “I’m bummed that such a beautiful town with so many fabulous things has one of the scariest hate things going on there.”

Fasulo had been tattooing for “a couple years” when she opened her school in upstate New York in 2003. She says her “extensive art training” and her 22 years of experience hand painting clothing helped her to “slide into [tattooing] because it’s like painting. It’s just with different tools.”

The Tattoo Learning Center, she says, is the kind of program she was looking for when she first started out. She didn’t believe she needed art guidance as much as she needed help with the fundamentals of safety, sterilization, and how the tools worked.

“I had two little kids at the time. I couldn’t sit and apprentice in a shop for a year or two,” she says. “I know I’m like a lot of people that don’t have the option to sit in a shop without getting paid.” 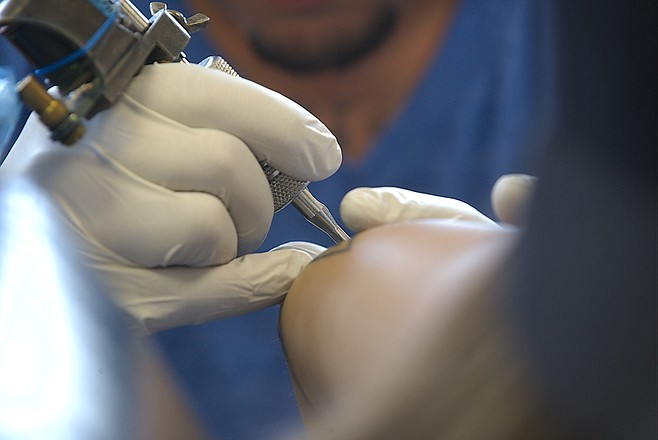 She says the program is not meant to be a substitute for an apprenticeship but rather a course in “fundamentals.”

“As much as everyone’s having a heart attack about this, I don’t believe what I’m doing is wrong at all,” she says. “I really, really believe from the bottom of my heart that we are doing a great service for those people who are going to do it anyway. So if they don’t come to school, they’re going to be boiling the needles on the stove at home, which you cannot do.”

Fasulo’s opponents claim that it would be nearly impossible to teach health and safety completely in such a short time, especially if she’s also trying to fit in the basics of other important aspects of tattooing.

“It’s not just ethics and the professionalism that you need to deal with customers but also the knowledge of blood-borne pathogens, disease control, cross-contamination,” says Rob Benavides, owner of Flying Panther Tattoo in Golden Hill. “I don’t think that any professional you ask is going to be confident that someone can learn it in that amount of time.”

Fasulo says her opponents are unfairly judging her curriculum as incomplete because of what they’ve seen on television.

“Our curriculum isn’t featured [on the show] at all,” she says. “What you’re seeing is a few of the incidents that made for reality TV.”

While she will not disclose her curriculum, she says it’s been approved by the New York State Department of Education, which should suggest that “we’re not just some crazy people just winging this,” she says.

Fasulo believes that some of the anger toward her is the result of her having breached a code meant to keep the tattoo industry “underground.”

“I understand why they’re so incensed by it, because it’s taking this mainstream,” she says. “However, my argument is that this is already mainstream. All you have to do is go to any public pool, and you’re going to see every mom, dad, teacher, banker, doctor — everybody has a tattoo. It’s over, the days of the secret society. They were gone 20 years ago.”

Benavides says Fasulo’s school makes it clear that she is one of the “leeches or parasites who are feeding off the tattoo industry or tattoo craze. When the rest of the established community of tattooing around the world is saying, ‘This is bad for the industry’ and you’re saying, ‘Screw you. We don’t care what you say. We’ll do what you want,’ how else are we supposed to view it?”

Fasulo says the number of tattoo shops in San Diego has nothing to do with her or her school. She takes only two or three students at a time and holds one session per month in San Diego. Her students, she says, come from other parts of the country and the world, drawn to San Diego by its tourist attractions. But these students then go back home to look for work.

“There isn’t one student that’s in San Diego looking for a job,” she says.

Pat Bieck, the 21-year-old apprentice at Tower Tattoo near Euclid and University in City Heights, says graduates of the Tattoo Learning Center would get laughed at if they applied for a job at a respectable tattoo shop. But he still believes the school is bad for the local tattoo industry. The two-week school goes against the “ancient art form,” whose tradition includes the apprenticeship, he says, but his complaints also concern pricing.

Fasulo confirms that her school, like a barber school, offers huge discounts on tattoos, but she says, “Honestly, we have more people [waiting for discounted tattoos] than we’ll ever get to.”

“I think that with all that free tattooing by tattoo schools, people are not understanding the prices of tattoos,” Bieck explains. “They’ll walk in, and something that’s like a good $250 or $300 tattoo, they’re trying to get it for $40. It’s horrible for real tattooers.”

Despite the opposition she faces from San Diego’s community of tattoo artists, Fasulo promises to keep her Pacific Beach school open.

“To close down because I was tired of running back and forth is one thing. But I’m not going to let these people stop me,” she says. “We are going to reinforce things a little bit before we open the doors again. I don’t want people milling around, touching our stuff.”