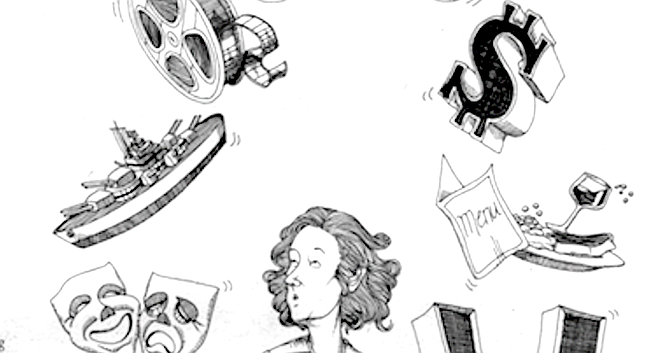 The San Diego Opera still performed all its works in English

What Made San Diego a Great Place to Be in 1975

The four best bargains of 1975

The four worst bargains in 1975

The five most uncomfortable places for a gay person in San Diego; 1975

The best concert of the year was of course Artur Rubinstein’s appearance at the Civic Theatre, playing the Brahms First Piano Concerto with Peter Eros and the San Diego Symphony. Rubinstein remains not only the greatest pianist in the world, but the best by a very large measure. He does more for every piece of music he plays than even the most able of his competitors: every moment is a living one, full of expression and musical meaning. At the age of eighty-nine, he has lost none of his technique, his musicianship, his personal charm, or his loving attachment to the world. My favorite picture among the many taken during Rubinstein’s stay in San Diego is of his visit to the Zoo, showing one of the happiest and most talented octagenarians of all time with a baby chimpanzee, each contemplating the other with the liveliest curiosity.

The best vocal recital was that of Eleanor Steber at the Hotel del Coronado. After experiencing vocal difficulties and being retired from the Metropolitan, Miss Steber has recovered the full glorious bloom of that tender, youthful, vibrant voice, and her sensitivity to phrasing and dynamic shadings is greater than ever.

The best chamber music concert was given by the Tokyo String Quartet at San Diego State. There are so many fine quartets around, many of them made up of quite young musicians, that for such a group to be outstanding it must be supreme. “Supreme” describes the Tokyo Quartet, whose playing has an innerness and intensity — an almost mystical identification with the music — that is scarcely to be matched elsewhere. Aside from the hypnotically expressive playing, the moment I remember with most pleasure from this concert was when, between movements, one of the young Japanese musicians roused himself from his utter absorption in the music, like a deep-sea creature slowly drifting up from the depths, and murmured to the rapt audience, “Please close the door. There is a draught.” A wonderful little shock — because the audience, their minds completely taken over by Bartok, had for the moment forgotten the existence of words, draughts, doors, buildings, and the great globe itself.

The best performance by a local group was the San Diego Symphony’s exciting reading of the Brahms First Symphony, under Maestro Eros. For virtually the first time, I became convinced of this conductor’s excellence — his integrity of style and conception, his driving' forcefulness, his own authentic musical personality. And I also realized that the orchestra has at last become one which, in its better moments (and his was assuredly one of them), can provide a sturdy rival to the Los Angeles Philharmonic.

The best dramatic offerings of the year were Shaw’s You Never Can Tell and Shakespeare’s Much Ado About Nothing, both at the Old Globe. Craig Noel’s stylish staging of the Shaw play uncovered every bit of amusement and pseudo-wisdom in this typically Shavian work (pseudowisdom because it only seems wise until you have left the theatre); his actors were chosen and directed with the wonderful theatrical sureness that marks Mr. Noel’s directorial style and that has made him, over the years, so precious an asset to our community. The Much Ado, during the summer Shakespeare festival, rescued a play that is often relegated to the status of a second class Shakespearean comedy.

Tire beauty of the scenery and costumes contributed to the poignant note of melancholy that was struck throughout; the acting was delightful; and the whole production seemed a perfect, polished jewel, the excellence of which neatly concealed the play’s flaws.

I wish I had gone - Toots And The Maytalls, Balboa Stadium

I skipped them - Elton John, Jethro Tull, The Eagles I should have - Aerosmith, Herbie Hancock, Graham Central Station How Could You Be Soo Good On Record And So Lousy In Concert - Jeff Beck, Golden Hall Vice-Versa - KC and The Sunshine Band, Sports Arena

Businessman Of The Year

Clive Davis, President of Arichta Records. Anyone who can have Archie Shepp, Anthony Braxton, Cecil Taylor, TTie Breckers, and Mai Waldron on the same label with Barry Manilow, Patti Smith, Bay City Rollers, and The Outlaws is either an artistic pervert or an economic genius.

Jon Landau, the rock critic whose declaration that Bruce Springsteen was the “past, present, and future of rock and roll” got him a position as Springsteen’s manager, thus requiring that his beaming mug be plastered on the pages of Time, Newsweek and other periodicals.

Ken Russel, for turning The Who’s Tommy, “the twentieth-century’s greatest work of art” (huh?) into a two-hour rococo pig sty; a fitting fate for the first rock opera.

Stop In The Name Of Love Award:

Diana Ross, who after such a smashing debut as an actress in Lady Sings The Blues succumbed to a ranting variation of the same role in Mahogany.

Trend Of The Year

Disco-decadence. At last Muzak became a recognizable force on the pop charts. By adding a barely funky beat, people such as Barry White, Van McCoy, MFSB, Percy Faith, and The Silver Convention got Muzak out of the office and onto the dance floor.

Roxy Music, The Wailers, Archie Shepp, and Anthony Braxton will make their way to San Diego; Bryan Ferry will get his Tuxedo on the cover of Newsweek; Peter Townshend, Neil Young, and Mick Jagger will collaborate on an album, Rock’s No Fun Anymore, But It’s All I Know; Talented local bands like United States Monsters, Grace, Glory, Harlequin, Horsefeathers and Doomsday Watermelon will get the widespread attention they deserve.

San Diego politics hasn't changed much. It was also a lot more conservative at the time. Neither has military bureaucracy. Strongly disagree about Born to Run & Horses, both now recognized as being among the best albums of all time.