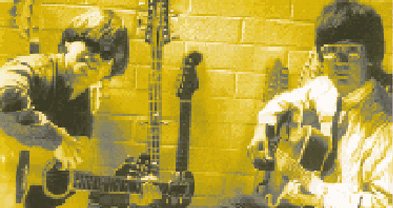 Influences: The Beatles, the Yardbirds, Pretty Things, Badfinger, the Strawberries, Klaatu, Pilot, Elvis Costello, the Knack, Squeeze, Status Quo, the Action, the Creation, the Who, Secret Affair, the Jam, the Kinks, the Monks, the Crawdaddys, the Tell-Tale Hearts, the Orfuns, Brain Police

Manual Scan was formed in the early 1980s in San Diego, CA. The first lineup consisted of Bart Mendoza on vocals and guitar, Kevin Ring (later Kevin Donaker-Ring) on guitar and vocals, David Fleminger on bass, and Paul Kaufman on drums. Througout several lineups, the core of Mendoza and Ring remained, and Manual Scan was one of the premiere mod bands of the U.S. in the 1980s.

Releasing a string of singles beginning in 1981 and an album issued in both the U.S. and England in 1986, the band toured extensively throughout California and Arizona as well as England (the 100 Club and the Marquee, among other venues) and Mexico.

A number of Manual Scan's recordings are available today: Manual Scan's U.S. "Best of" compilation, All Night Stand, is available from Get Hip Records (www.gethip.com), as is the Lost Sessions vinyl EP. (FYI: The band also has a "Best of" issued in Spain by Snap Records, Plan of Action, with different songs and a different cover.)

Numerous performers from around the world have covered Manual Scan songs, including the Eddies ("Jungle Beat"), Afterglow ("Of Heart & Soul"), Mod Fun ("Nothing Can Be Everything"), Anna Troy ("31968"), the Kingpins ("Plan of Action"), Anthony Meynell & Sugarplum ("Confidence & Love") and Static Halo ("American Way").

In November 2006, Spain's Munster Records re-issued Manual Scan's ultrarare Plan of Action 7" vinyl EP as part of their Collector's Club series. After evolving into the Shambles, an early 2006 Manual Scan reunion concert and a few subsequent shows indicated the band may re-form.

As of 2010, Mendoza and Ring are still members of the Shambles, along with Mark Z, formerly of the Crawdaddys. Manual Scan played another reunion show at the Casbah on January 30, 2010. Around the same time, they performed on CW-6 TV’s San Diego Living program, as well as convening at Signature Sound Studios with producer Alan Sanderson (Rolling Stones, Weezer) to record a special edition of the Pyles Sessions, to be broadcast on host Tim Pyles FM94.9 show.

In late 2010, drummer Morgan Young relocated to L.A., where he plays with Into the Presence, but he remains with the reunited band, which has a sporadic gig schedule.

The February 2011 issue of UK mag Heavy Soul (#5) included a twelve track CD, featuring Manual Scan’s otherwise unavailable cover of “She’s So Fine” by the Easybeats. In addition, Spanish band Paff Boom has recorded a version of Manual Scan’s instrumental “The Bird” for inclusion on an upcoming EP.

In May 2011, the band appeared on the cover of Heavy Soul #6, a fanzine from England, which included a CD featuring the track “Plan of Action” recorded for The Pyles Sessions by Alan Sanderson and Tim Pyles. Around the same time, former Manual Scan roadie (and occasional backup singer) Steve Griggs passed away. He was the former president of Secret Society S.C., as well as MCing several local New Sounds Festivals.

When they opened for the Penetrators at the Casbah on August 13, 2011, drummer Morgan Young was replaced by former Dragons drummer Jarrod Lucas, alongside bassist Tim Blankenship (ex-Creedle), keyboardist Dave Fleminger (the Answers, Cardiac Kidz), and MS mainmen Bart Mendoza and Kevin Donaker-Ring.

In Spring 2012, band members began writing songs with former child actor Robbie Rist, best known as little Oliver the Jinx in the final season of the Brady Bunch TV show. Thety also recorded the title track to Remember The Lightning: A Tribute to 20/20.

When the band reconvened in the studio to record new songs for the first time since the late 1980s, the lineup featured Bart Mendoza, Kevin Donaker-Ring, Dave Fleminger, Tim Blankenship, and Jarrod Lucas.

Texas-based Cheap Rewards Records released a Best Of Manual Scan full-length, only available as a download and on vinyl. All Night Scan includes three tracks that are new to vinyl, including a new recording: a 2010 version of “Plan of Action” recorded for Fm94.9's Pyles Sessions and produced by Alan Sanderson. Also, it's the first time “American Way” (1982) has been included on a Manual Scan album.

“What I really like most about this album is that I had very little to do with it, other than providing source materials,” says Bart Mendoza. “They did the track selection, artwork the whole nine yards. I really think they did a fantastic job capturing the band, and I have to compliment the mastering.”

A 2013 odds-and-ends collection All Night Scan includes three tracks that are new to vinyl and a new recording: a 2010 version of “Plan of Action” recorded for Fm94.9's Pyles Sessions and produced by Alan Sanderson. It's also the first time “American Way” (1982) has been included on a Manual Scan album.

In late 2014, they recorded a 26-second theme song for Tim Pyles radio program, “The Tim Pyles Theme,” tracked November 6 with Alan Sanderson at Pacific Beat Studios. "The Tim Pyles Theme" was included on a vinyl multi-artist EP Sounds From the Stratosphere, released in early 2015 by Blindspot Records. A new album was released the following December, The Pyles Sessions, recorded for 91X DJ Tim Pyles' program and produced by Sanderson. Released on Spain's SNAP! Records, a CD version included bonus tracks, such as a version of "Walk the Beat" recorded live at the Casbah with Chris Sullivan and Chris Davies of the Penetrators.

After playing Spain's annual Purple Weekend Festival, running December 5-7, 2015 and promoting The Pyles Sessions, the band announced the pending release of a set of demos from 1980. A series of reunion performances took place in 2016.

Manual Scan was featured in volume one of The San Diego Underground Files from Spain's Bickerton Records, which collects unreleased demos and rare tracks from San Diego bands of the late 1970s and early 1980s, available digitally or on deluxe 10" colored vinyl, with inserts and posters. Volume one was released in January 2020, with additional volumes spotlighting San Diego bands like the Event and Four Eyes, and sporting extensive liner notes by Bart Mendoza.