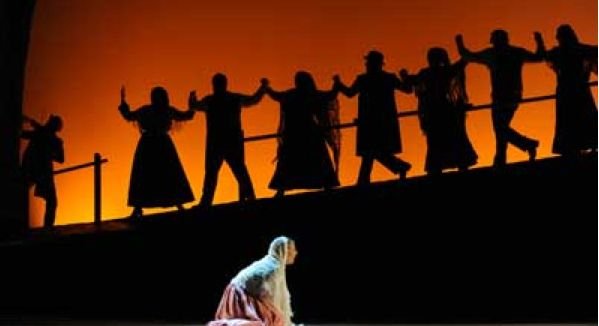 Fiddler on the Roof at Moonlight

Right before the opening curtain, Moonlight makes the traditional announcement: turn off cell phones, no photographs, etc. They should add another: please don't sing along to the great songs of Jerry Bock (music) and Sheldon Harnick (lyrics).

Or even hum, for that matter, when you forget the words. As in, "Sun-rise, sun-set, swiftly la-da-di..." On opening night, my section joined in so often I had to switch seats at halftime.

Fiddler begins in harmony. But Tevye and his neighbors, as the old curse goes, live in interesting times.

Anatevka is a Jewish shtetl - a small village - surrounded by Tsarist Russia in 1905. Tevye, a poor milkman, compares himself to a fiddler on a roof, "trying to scratch out a pleasant, simple tune without breaking his neck. It isn't easy."

"Tradition" has kept the marriage, and the community, "in balance." The village is so traditional that, when a new schoolteacher says women should learn too, someone shouts, "a radical!"

Bad news rolls over Tevye in waves. Oldest daughter Tzeitel (Alexis Grenier) wants to bypass the matchmaker and chose her husband. But at least she asked her parents' permission. Daughter Hodel (Charlene Koepf) will marry the teacher without asking. And young Chava (Aubrey Elson) breaks tradition even more: she wants to marry outside the faith.

Tevye, Golda, and the others learn to adapt and move on, and the music that sees them off combines harmony and dissonance.

(For those familiar with the musical's source - Sholom Aleichem's "Tevye and His Daughters" - the conclusion was controversial, since the original Tevye cannot change and crumbles).

As the harried, quizzical Tevye, David Ellenstein had many key aspects in place on opening night: the burden, the humor, plus a fine rapport with the audience. Though his "Do You Love Me?" sung with Victoria Strong's excellent Golda was a highlight, Ellenstein had vocal problems that detracted from his performance.

Change is a part of the musical and the Moonlight production, since this is the last show Kathy Brombacher will direct as Artistic Director of the company after 30 years as its head. Looking back - and how "swiftly fly the years" - her achievements have been extraordinary!

All day and all night! She's meant so much to theater in North County and San Diego in general. Anyone who remembers the original Moonlight outdoor setup - a stage and a hillside - would be astonished an what's there now. And behind the scenes she's been an indefatigable support system to who knows how many actors and designers and volunteers...