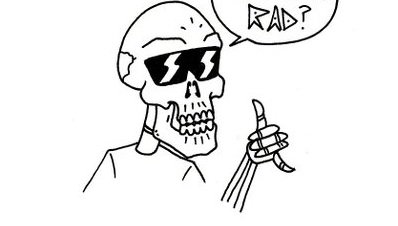 This Saturday, August 27, San Diego Writers, Ink is hosting a release party for the Radvocate, a zine featuring art, stories, and music reviews.

“Basically, I had the idea in my head for a few years,” says Radvocate editor Matt Lewis. “A friend and I were planning on getting investors to do a print magazine, but we never got the planning or finances to pan out. I was already involved with San Diego Writers, Ink and heard about a class they were doing about zines. So I thought, bypass all the headache of financiers and glossy pages and make a zine to give to friends. It was more attractive, more real, and would have more of an impact than a blog or a glossy magazine.”

Lewis distributes the Radvocate, which is on its second issue, via a mailing list of about 70 people and bookstores across the country, in Canada, and France. In addition, about 300 copies of the zine are available in San Diego storefronts, coffee shops, and art galleries.

“I’d like to see that increase to 500 or 600 copies,” says Lewis. “What I’m excited about is that with each passing issue, it gets more and more diverse. It’s this amalgamation of creative things from people who don’t normally get published or have their art in galleries. So, what I’m hoping is for the print quality to go up. The reason for paper now is because it’s the most cost effective without charging for the zine.”

The release party will feature readings from the zine by Lewis, Heidi Raynowska, and yours truly.