He tied the knot back in January 1965, got sued for divorce in June 2009, and was proclaimed legally separated in January 2010. Now UT publisher Doug Manchester, 70, who's been photographed partying with a bevy of young women in recent years, wants to try the divorce thing once again.

So says an April 24 petition for dissolution of marriage filed in San Diego Superior Court by Manchester against his wife of almost five decades, now estranged, Betsy. 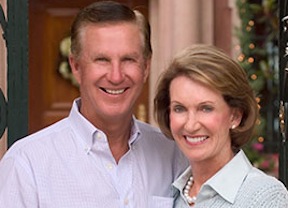 The Manchesters’ first try at splitting up four years ago was full of high drama, with a series of declarations filed by Betsy's lawyers spinning out a tale of financial woe she said was due to her husband's efforts to cut her off from the family's fortune.

Betsy described the couple's lavish lifestyle before she filed for divorce:

As an example of the standard of living that DOUG and I enjoyed during our long marriage, in 2007, we threw a birthday party for DOUG at the Manchester Grand Hyatt.

There were over 220 guests and the party alone cost more than $200,000. We then flew to Costa Rica on a private Gulfstream IV jet, and went on a weeklong cruise in Costa Rica aboard a chartered 165-foot private yacht. After the cruise, we returned home on the Gulfstream IV jet.

In April of 2008, DOUG and I took a trip from San Diego to Quebec City, then to Moscow, Russia, St. Petersburg, Russia and Florence Italy. All of our air travel was via private jet, a Gulfstream IV.

We stayed at the finest hotels and enjoyed the finest luxuries throughout our travels. The entire trip cost in excess of $250,000 for the two of us.

(A revealing video of post-separation publisher Manchester celebrating his 70th birthday at a lavish party with the Beach Boys and a host of scantily clad young women recently appeared on Vimeo, but was subsequently taken down after Don Bauder covered it here.)

The couple reached a property settlement agreement in December 2009, but no details were made public.

Last month's filing asks the court to confirm that Manchester's separate assets include:

1.Petitioner's earnings and accumulations since date of separation. 2. Cash on hand and bank accounts in the name of Petitioner. 3. Petitioner's clothing, jewelry and personal effects. 4.Petitioner's Social Security benefits, exclusive of derivative benefits to which Respondent is entitled. 5. All property acquired by Petitioner prior to marriage, after separation, or by gift, transmutation, bequest or descent during the marriage, and all property awarded or confirmed to Petitioner in the Marital Settlement Agreement effective 12/17/09, which was incorporated into the Judgment of Legal Separation filed 1/13/10 in SDSC D510557 and all property attributable to or traceable from this property.

According to the latest filing, a "family resolution conference" is set with Judge Michael S. Groch this coming November 7.

Are more Manchester family fireworks on the way? Stay tuned.

It seemed to me that for the longest time those two were the poster kids for wedded bliss. And then came the split-up. The story indicates they reached a property settlement in 2009. What was the purpose of that, if not to be divorced as soon as possible? So now, over three years later, it would appear as if they are actually going to divorce. All this delay seems most unusual, and there's not explanation offered as to why. Can someone explain some or all of this to me and the other blog readers?

The lure of more $$$$ and killer divorce lawyers.