Seal rope can stay up at La Jolla year-round

Yet another blow was struck yesterday (May 15) in the long-running battle between beachgoers and seals over access to the La Jolla Children’s Pool, this one could be the knockout punch in favor of the seals.

The city of San Diego announced via release that the California Coastal Commission has issued a permit allowing for the permanent, year-round placement of a barrier rope to protect the seals and their calves that have taken up residence at the beach. The permit is good for three years, after which point it must be renewed or the city must go back to installing the barrier on a temporary basis during seal pupping season from December 15 to May 15.

The victory for seal proponents comes after a judge in April denied a request by a group called Friends of Children’s Pool to reduce the area roped off from 152 feet to 130 feet. The judge at that time also declined to act on a request to reverse the night closure of the beach, ordered by Mayor Bob Filner after video surfaced showing harassment of the seals after dark.

“This is a remarkable beach where the urban environment of a city blends seamlessly into the natural habitat of the seals. We need to provide protection for these animals every day, especially as the seals raise their pups, born over the last several months right here in La Jolla,” Filner said in the city’s release trumpeting the development. “Keeping the rope up year-round is the right thing to do.” 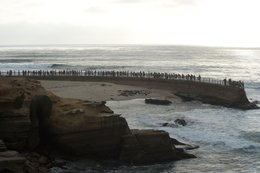