The La Jolla Children's Pool may be in need of a name change. A better name for the "public park, bathing pool for children," dedicated by Ellen Browning Scripps in 1930 could be La Jolla Lawsuit Lagoon.

In the past twenty years, ever since seals found refuge at the beach, the protected sliver of sand has been both a popular tourist attraction and hotbed for debate.

Some want to see the beach remain a seal sanctuary while others, mostly divers looking to explore the reefs, want joint use of the beach.

Since 1999 numerous lawsuits have been filed and even more public hearings have been held on the matter.

On February 15, another lawsuit was added to the list. The latest challenges a decision by Park and Recreation staffers to lengthen the 130-foot rope barrier placed on the beach during the annual pupping season by 22-feet.

The lawsuit was filed by the Friends of the Children Pool which is headed by longtime diver and proponent of joint use at Children's Pool, John Leek.

The exact length of the rope has been an issue for years but recently resurfaced in an August 23, 2012 staff report. In the report, park officials stated that the initial 130-foot measurement was always short and needed to be lengthened in order to meet the requirement of the permit to have a three foot opening at the end of the beach.

Earlier this year it was determined that there had been a measurement error regarding the length of the rope installations...[The] current permit depicts a three-foot opening from the end of the rope installation to the rock outcropping at the easterly side of the pool, the length of the rope is shown as 130 feet. That is incorrect. The length of rope required to stretch from the seawall to a point that would create a three-foot opening is 152 feet. That error was noticed earlier this year and the installation in the field was shortened to the approved 130 feet. The proposed amendment to the Site Development Permit for the year-round rope would rectify that error."

Not everyone agreed with the decision. The local planning group appealed a proposed amendment to the permit. San Diego planning commissioners also disagreed.

But on December 21, Mayor Bob Filner and park and recreation staffers moved forward, stretching the rope to 152-feet.

But city staff wasn't deterred and the coastal development permit was amended on January 9 of this year.

"Unaware of the City's post hoc efforts to cover up a flagrant (and perhaps willful) disregard of the permitting procedures, Petitioner wrote to the Coastal Commission and the City complaining about the unauthorized the decision to extend the length of the rope barrier, and demanding that the rope barrier be returned to its prior condition to conform to the clear requirements of the permits," reads the lawsuit.

Superior Court Ronald Prager will consider the lawsuit at an upcoming hearing. 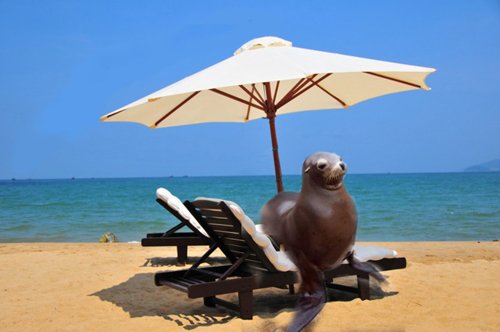