Accused of lewd acts in public and then attacking a witness

Two Border Patrol agents, a man and a woman, who are accused of committing lewd acts in public and then battery on a witness, have begun selecting a jury for their trial in San Diego County Superior Court.

Kallie Lamb Helwig, 25, and Gerald Joseph Torello, 35, have pleaded not guilty to charges that they performed sex acts at the Del Mar Fairgrounds, and then attacked a woman who complained. The crimes allegedly occurred during the final performance of a Cirque du Soleil event, on May 27, 2012.

The off-duty Border Patrol agents were not in uniform at the time, after 5 p.m. on a Sunday afternoon, when the woman seated near them during the circus entertainment reportedly told them to “get a room.”

The alleged victim said she was attacked when she went to leave the circus tent; she said the pair were “lying in wait” for her, near an exit. She described the female, Kallie Lamb Helwig, as slugging her while Helwig’s companion, Gerald Joseph Torello, shouted encouragement.

The alleged victim said that when she found out the two were Border Patrol agents, her “heart sank” and she feared the matter would be “swept under the rug.”

Neither defendant was taken into custody; they were informed more than a month later by “fax” of misdemeanor charges against them. Both defendants have privately retained defense attorneys and continue to remain at liberty.

Prosecutor Tracy Prior has said she will not make a plea deal. Jury selection began this morning and a jury is expected to be seated sometime tomorrow, Friday. Evidence is expected to begin on Monday morning, February 4, before Judge Harry Elias, in San Diego's North County Superior Courthouse in Vista. 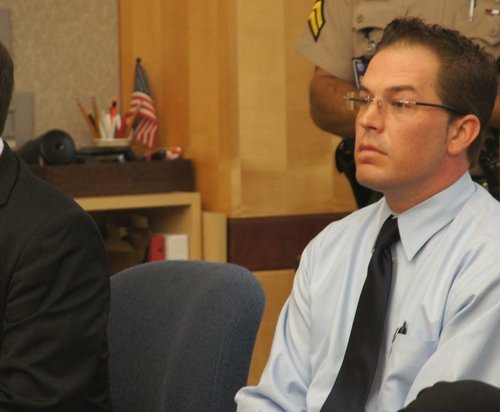 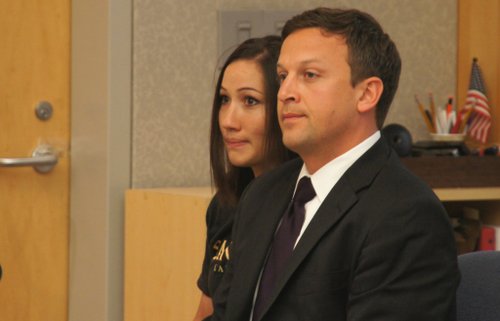 Ahh, the prosecutor has said she will not make a "plea deal." Good for her. But we must note that these two clowns are not charged with anything all that serious. These are misdemeanors, in the same category as minor traffic offenses, animal control matters, spitting in the street, etc. So, if the two jerks want to settle it without a trial, they get to plead guilty. As discussed previously, the BP will not likely fire them over this; the BP has been notoriously lax in its hiring standards in recent years, and they'll likely keep their nice public sector jobs and badges and all the other things that go with that.

The true disgrace here is that they were not charged with felonies. Assault is generally treated that way, as is conspiracy. What rug? What sweeping? What corner? Equal justice for all.

Visduh, you should know by now; when the law is broken by those paid to uphold it....it doesn't really count! If San Diego is famous for anything it is how those with a shield can pretty much get away with anything.

The tale of these two thugs reminds me of a strange movie called "Helwig and the Angry Inch." I think that may be what the problem is.

I've never heard of that movie. It is probably fascinating and revealing. Your comment about how a shield can let the wearer get away with anything here is all too true. And that has been the case for decades, regardless of who was in the DA chair.

Visduh, you should know by now; when the law is broken by those paid to uphold it....it doesn't really count

You learn fast my young grasshopper.

Java, how in the world does this story remind you of Hedwig and the Angry Inch? (Weird and cool movie!)

I hear that...but it's discouraging. I mean, how can we expect the kids today to grow up with a respect for the law and others--to be decent human beings, when they see these authority figures behaving like such lowlifes? If border patrol agents are allowed to mug an innocent person, why can't we? This is why, instead of letting these types slide, they should be made an example of. They are supposed to act according to a higher standard, and when I see things like this, I just feel our society is really deteriorating, and it's our authority figures who are leading the way. I'd say they should be ashamed but it's obvious they don't possess the ethical bearings required to feel such an emotion. If they had any integrity, they would resign, but I doubt that is going to happen either. Maybe the Border Patrol will find some sense of professional pride and let these two losers go.

A jury of 9 women and 3 men was seated late today, Friday, February 1. Opening arguments in this case are expected to be heard Monday morning, after 8:45 a.m., in Department 25, third floor of San Diego's North County Superior Courthouse in Vista.

Attorneys for the defendants made a motion, asking the judge to order journalists to tilize any photos of the accused. Defense tried to argue that their work as Border Patrol agents made this necessary. So far, Superior Court Judge Harry Elias has not granted this request, although he may still rule on the motion, he said late today. In the meantime, here is a photo of defendant Gerald Joseph Torello, leaving the courthouse, looking jolly. Photo provided by determined photographer Nick Morris. 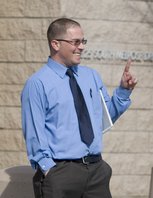 They are not a very attractive, individually or as a couple. I wonder why they had the chip on their shoulder. If either one is convicted they should both be fired from their LEO jobs.

"Two Border Patrol agents, a man and a woman, who are accused of committing lewd acts in public and then battery on a witness, have ..."

Eva, are they also charged with misdemeanor lewd acts?? I thought the battery charge was the only charge???

Lewd acts conviction could force them onto the lifetime sex offender registry.

Helwig and Torello are both charged with: two counts of PC647a each, as disorderly conduct and two separate lewd acts in public; one PC242 misdemeanor battery on named victim; and one PC647.6 (a)(1) misdemeanor annoy child. Also, Gerald Torello is charged with making criminal threat, PC422, as a misdemeanor. Yes, I have heard what the alleged lewd acts were, if you want the full description you'll have to come to court and hear the witnesses.

Also, Gerald Torello is charged with making criminal threat, PC422, as a misdemeanor

Can you post it or PM me what they are accused of doing.

Fred, It was just a play on the name: Helwig/Hedwig? But she does seem to have an "angry" boyfriend. Whether there's an inch there or not, I could not tell you. I'm no Freud, but often times, when punks like these beat on an innocent, it is usually their way of compensating for something.

I'm no Freud, but often times, when punks like these beat on an innocent, it is usually their way of compensating for something.

Their jobs make the case and charges/behavior even more outrageous.