Prosecution has rested, in the trial of two off-duty Border Patrol agents who are accused of lewd acts in public and then attacking a witness who complained.

Kallie Lamb Helwig, 25, and Gerald Joseph Torello, 35, have pleaded not guilty to charges that they performed sex acts during a circus performance at the Del Mar Fairgrounds, and then battered a woman who tried to summon an usher.

The alleged incident occurred during the final performance of a Cirque du Soleil event, on a Sunday evening, May 27, 2012.

Prosecutor Tracy Prior charged five counts, including lewd acts and battery and annoy child and making criminal threats; all are charged as misdemeanors.

Multiple witnesses testified that they heard Gerald Torello threaten to “kill” someone if they spoke again to his companion, Kallie Helwig; this allegedly during sex acts in the grandstands, while adults seated nearby said they were trying to convince the two to stop.

A security person who testified yesterday said when he asked Gerald Torello for ID, he was shown a Border Patrol badge; security people became involved after an alleged violent confrontation between Kallie Helwig and a woman bystander.

“I asked him if he was armed, he said no,” said director of security Nicholas Brown. The security director also testified that he found Gerald Torello to be “obviously intoxicated.” A San Diego County Sheriff’s deputy testified that Gerald Torello was held for three hours that night until he became sober, and then he was released.

Both defendants have remained at liberty, since the alleged incidents.

Defense attorneys are expected to present their case today, which may include the defendants taking the witness stand in their own defense, in San Diego’s North County superior courthouse.

The jury of nine women and three men has heard two days of testimony so far, and is expected to go into deliberations some time today or tomorrow. 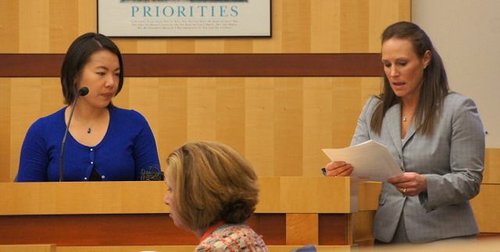 The alleged victim and prosecutor Tracy Prior, in court yesterday. Photo Weatherston.

It is interesting that you describe "multiple witnesses" in this case. To make a case like this one stick with a jury, the more witnesses the merrier. It sounds as if the defense has no witnesses of their own. Regardless of the acts that led up to the assault, it is apparent that there are witnesses to the attack, and that should get a conviction on that count. When can we expect to see this wrapped up and sent to the jury?

Multiple witnesses?? How many? Unless they had direct confirmation of the sex acts I don't know if it is that solid. I hope the two defendants take the stand and give THEIR side of the story, because if they don't I think they are going down, their only hope would be to give their side and hope they had a credible explanation.

Multiple witnesses testified that they heard Gerald Torello threaten to “kill” someone if they spoke again to his companion, Kallie Helwig;

OK, if that is true then the 422 is a FELONY criminal threats beef, NOT a misdemeanor.

That is what I have been thinking all along: one or more of these things was felonious. The DA is going to a lot of trouble to tag misdemeanors on these clowns, and one wonders why. The reason methinks is that a failure to prosecute them would be really bad publicity, and that it was publicity that got it this far. The law enforcement code of silence is still at work here. Then there are the juries, such as the first Peyer trial, and those that heard the Gwaltney case twice, that had holdouts who just would not accept the notion that a cop could be bad. (In those specific cases, the cop killed while on duty.) So, rather than society holding these badge carriers to a higher standard of conduct, juries often hold them to a lesser standard, and acquit the guilty.

Vis, not only would the criminal threat of "killing" someone be a felony 422 beef, that is also a "strike" offense when charged as a felony.

Apparently Helwig and Torello testified yesterday and denied everything. She even claimed self defense during the fight with this Asian female psychiatrist who happens to be a naval officer. Yeah, right! With all the training that the Border Patrol gives those agents in hand-to-hand combat, SHE was on the defensive? LOL We can wonder what happened today. Maybe Eva will file another report when it goes to the jury.

If they have independent witnesses the jury may not be swayed by the BP agents, but we are not there, and the credibility of a witness has a lot to do with their demeanor. If they are convicted they should be fired IMO. If aquitted then they should suffer no adverse action at BP.