Medical marijuana proponents petition for removal of US Attorney Duffy

The San Diego chapter of medical marijuana advocacy group Americans for Safe Access has launched an online petition calling for the removal of U.S. Attorney Laura Duffy, an outspoken cannabis critic who has led a determined battle against medical marijuana access.

The full text of the petition reads as follows:

Laura E. Duffy was sworn in as the Presidentially-appointed United States Attorney for the Southern District of California on June 2, 2010. Since then, she has waged a vindictive war on legitimate medical marijuana patients in her district.

Aside from ordering arrests, prosecutions, and investigations of medical marijuana patients who are in clear and unambiguous compliance with state law, she has directly threatened elected officials and their staff with prosecutions for simply trying to pass laws allowing patients safe access.

Laura Duffy must be removed and replaced with a US Attorney that is willing to work with elected officials and the community, rather than wage war against them.

As of mid-morning on February 28, the petition had gathered 54 signatures, out of a solicited 10,000.

Americans for Safe Access also posted a video from Bob Filner to its YouTube account last week, in which the mayor makes an open plea to the federal government to respect laws passed by various states concerning marijuana.

“What I would like federal government and our United States Congress to do is to allow California and about 15 other states which have legalized medical marijuana to be able, in fact, to make it legal,” Filner says. The plant is still federally classified as a Schedule I narcotic, with no officially acknowledged useful purposes.

Meanwhile, Filner’s office says it needs more time to draft a new proposal that would allow for storefront dispensaries in certain parts of the city, and has postponed a city council discussion on the issue originally scheduled for March 5. 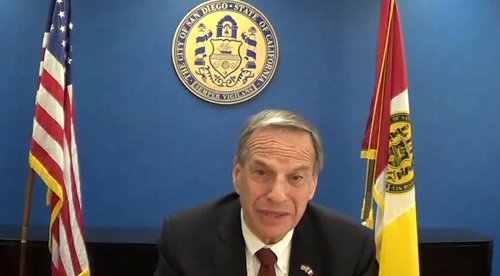