Does San Diego's City Attorney have conflict of interest in hoteliers' legal attack on mayor?

With the looming threat of a lawsuit against the city of San Diego and mayor Bob Filner by the so-called San Diego Tourism Marketing District, insider eyes are turning to city attorney Jan Goldsmith and his long and cozy political relationship with the city's big hotel owners. 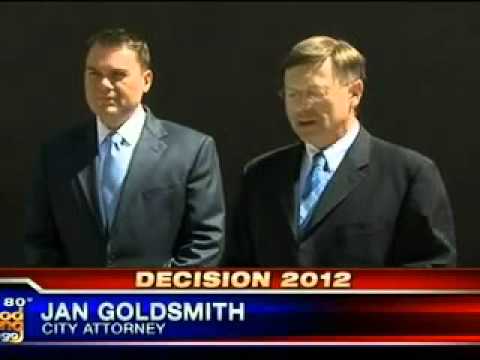 The city attorney has scheduled a news conference for later today, according to a tweet this morning by U-T San Diego reporter Craig Gustafson: "City Attorney Jan Goldsmith to hold 1:30 newser on TMD. The tension between he and Filner may come to a head."

Goldsmith, a former GOP Assemblyman from Poway who moved into San Diego from Coronado to run for city attorney against then-incumbent Democrat Michael Aguirre in 2008, would in the normal course of events be called upon to defend the city from the threatened lawsuit, to be considered Friday by the board of the San Diego Tourist Marketing District.

As noted here yesterday, the board contends that Filner must honor an unsigned contract to turn over mega-millions of dollars in city-collected cash; the deal was negotiated by previous GOP mayor Jerry Sanders, who also enjoyed big financial backing from the hoteliers.

A vote on the legal attack by the district against Filner and the city is set for Friday morning at the Bahia Hotel on Mission Bay, run by district board member Bill Evans.

Based on a spreadsheet analysis of Goldsmith's campaign financial data, posted online by the San Diego city clerk's office, many of the major movers behind the would-be case against the city have given heavily to the city attorney.

At the top of the list is Atlas Hotels, the giant Mission Valley inn keeper whose president C. Terry Brown is chairman of the board of the marketing district and has been outspoken against the mayor's self-styled reform efforts. Brown and his executives, including James Oddo, Brad Sutton, and Mike McDowell, who is now at the center of the fight against Filner, have given Goldsmith's campaign fund a total of $4,990.

The marketing district's treasurer Bill Evans of Evans Hotels and his fellow company executives gave Goldsmith a total of $1,650.

Another big Goldsmith donor with a stake in the hotel cash battle is the Silicon Valley law firm of Cooley, Godward, Kronish, a registered lobbyist for San Diego's Competitor Group, which stages the annual Rock and Roll Marathon and is set to present a pitch for more tourism district funding at Friday's meeting. Cooley lawyers gave the city attorney's campaign fund a total of $1,920.

In addition, registered city lobbyists on the payroll of California Strategies, the Sacramento-based influence peddling firm founded by the one-time top aide to GOP governor and mayor Pete Wilson Bob White, have given Goldsmith $3380. The wife of staffer Ben Haddad kicked in $500.

The firm's Tom Blair, a former Union-Tribune columnist and ex-editor of San Diego Magazine, is now working for California Strategies and currently handling media for the Tourism Marketing District in its war with the mayor.

As reported here by Dorian Hargrove last month, Goldsmith has used cash from his campaign committee to help fund the GOP Lincoln Club ($15,900) and a Mitt Romney super PAC ($25,000), as well as for personal travel to Florida for last summer's Republican convention, where he was an alternate Romney delegate, and to Las Vegas, Nevada.

We asked Goldsmith's spokesman Jon Heller yesterday whether the city attorney thought he had a conflict of interest in the pending marketing district matter and whether or not he planned to recuse himself from the case, but as of this morning have received no reply.

Can't wait to hear what was said!

Here ya go, from the belly of the beast: http://tinyurl.com/bc7a8kn

Goldsmith says the hoteliers are the payors. Wrong. The hotel guests pay.

You won't believe the newser! Just caught it on Channel 10...Filner takes over after Goldsmith repeatedly dodges a reporter's query as to whether he had talked to Filner about the issues:

Goldsmith admits to reporter that he only read about Filner's issues with the TMD contract in the newspaper (NOT the Reader, ya think?). Filner, sitting next to reporter, interjects and says he was not consulted, though he is the client and Goldsmith is HIS attorney, and Goldsmith is violating atty-client privilege. Filner gets up and takes over podium. Claims Goldsmith thinks Goldsmith can make policy...Can Filner file a complaint against Goldsmith with the State Bar?

This part is pretty amazing. That's a lot of money.

"In addition, registered city lobbyists on the payroll of California Strategies, the Sacramento-based influence peddling firm founded by the one-time top aide to GOP governor and mayor Pete Wilson Bob White, have given Goldsmith $3380. The wife of staffer Ben Haddad kicked in $500."

"The tension between HE and Filner?" Isn't it supposed to be "HIM?" Where are the writing coaches at the U-T when you need them? All gone to City Hall jobs and then public relations firms, I guess.